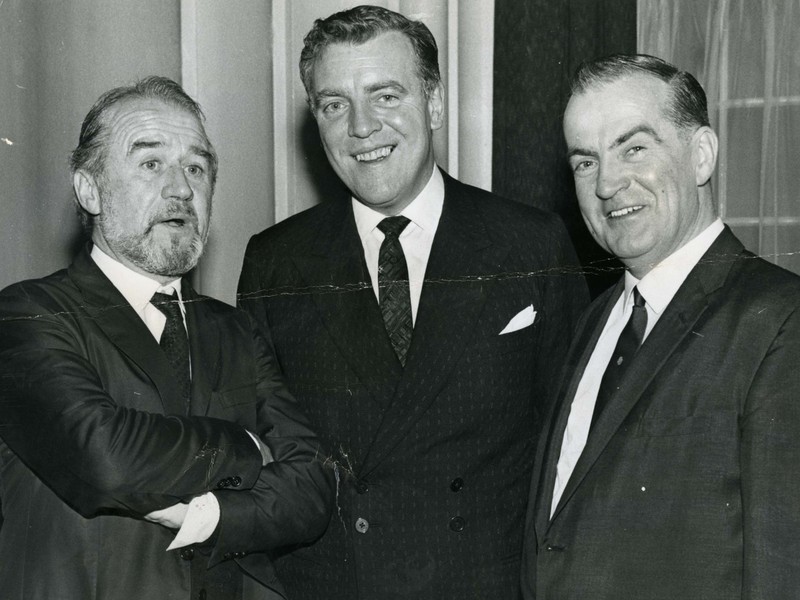 This is a black and white photo of the actor Cyril Cusack with the television presenter Eamon Andrews and the film festival director Dermot Breen. A bearded Cyril Cusack stands on the left, arms folded, in mid-conversation while both Eamon Andrews, at the centre, and Dermot Breen smile for the camera.

Cyril Cusack (1910-1993), and his daughter Sinéad, were both visitors to the festival. Born in South Africa, to an English mother and Irish father, Cusack ended up in Ireland when his parents separated. He joined the Abbey Theatre in 1932 with whom he acted almost sixty plays before joining the Royal Shakespeare Company in 1962. In the meantime he had established a successful film career and has an extensive filmography including The Rising of the Moon (John Ford, 1957), The Spy Who Came in from the Cold (Martin Ritt, 1965), The Day of the Jackal (Fred Zinnemann, 1973), and as Michil, in the first Irish language film Poitín (Bob Quinn, 1978) starring Cusack along with Donal McCann, Niall Tóibín, and Mick Lally. This photo is marked 1959 and Cusack had filmed Shake Hands with the Devil (Michael Anderson, 1959) that year. His last stage performance was in Chekhov's Three Sisters (1990) in which his three daughters, Sinéad, Sorcha, and Niamh also acted.

Dublin-born Eamon Andrews (1922-1987) was a well-known Irish radio and television presenter who worked primarily in England. He chaired the Radio Éireann Authority (now the RTÉ Authority) from 1960 overseeing the introduction of state television in Ireland. However he relinquished the role in 1964 following a row over the controversial content of the Late Late Show whose freedom of expression he defended. He worked as a sports commentator for many years before pioneering the chat show format in the UK. He is best known for his work as a presenter on the chat show This is Your Life which ran from its inception in 1955 until his death in 1987. One of the interviews he made in 1960 was with the Irish writer Brendan Behan in Meet the Quare Fella. He was awarded an honorary Commander of the British Empire in 1970 for his contribution to British broadcasting. He died some years later in 1987, age 64, following a short illness.

©Owen and Moroney. All rights reserved. Please credit Cork International Film Festival & provide a link back to this site.