Party at the Garda Station on MacCurtain Street, Cork 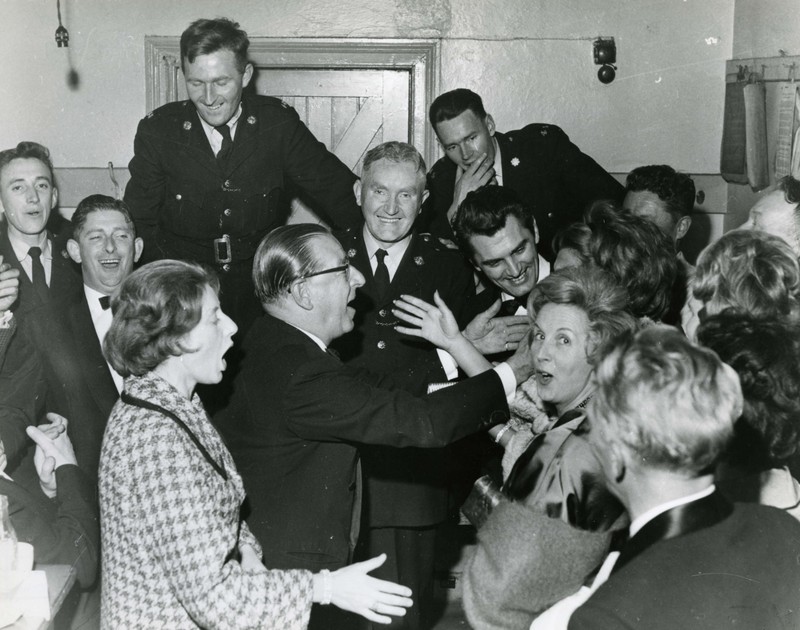 Party at the Garda Station on MacCurtain Street, Cork

This is a black and white photo of a party being held at the Garda Barracks on MacCurtain Street in Cork. Marked 1962 the photo identifies four of the revellers to be the actor Ronnie Shiner, the local businessman Donal Crosbie, Norma Crosbie and Edmond Purton. The room is packed with a well-dressed crowd in the midst of a sing-song and include, at the back of the room by the wooden door, three Garda in uniform.

At the centre of the photo we can make out the distinctive profile of the British actor Ronald Shiner, arms raised as if about to greet a companion. Known as ‘Ronnie’, Shiner (1903-1966) was a British stand-up comedian and comedy actor who worked on stage, television and film. A career highlight included the stage version of Worm’s Eye View (1945 to 1947) followed by a film version in 1952 with Diana Dors. In 1962, around the time this photo was taken, he had made a TV version of Worm’s Eye View for the BBC. Shiner was the subject of This is Your Life in 1958 when he was surprised by Eamon Andrews at the BBC Television Theatre.

The party is taking place in the MacCurtain Street Garda Station which was located at 58 MacCurtain Street. It was originally a house built c.1830 before its use as a Garda station and constabulary barracks. The National Inventory of Architectural Heritage describes it as a terraced three-bay four-storey former house, over basement, as a pair with the adjoining former house to the west. A flight of limestone steps, framed by cast-iron railings, lead to a round-headed door opening. The station was closed in 2013, as part of a programme of Garda station closures around Ireland.