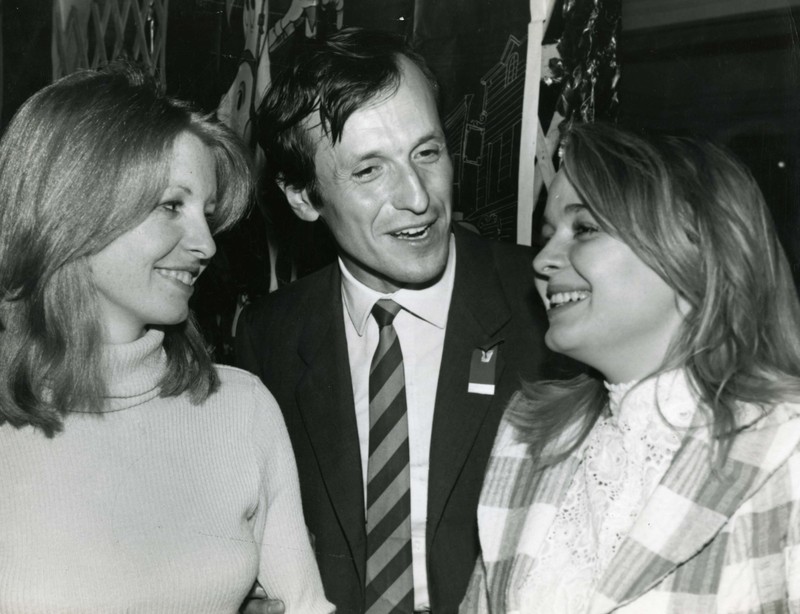 This is a black and white photo of Sinéad Cusack and Jane Asher with the Italian film director Corrado Farina. The three of them are chatting and laughing while standing facing each other. Jane Asher, on the left of the photo, is wearing a light-coloured polo-neck jumper and is looking over to a smiling Sinéad Cusack, who is wearing an embroidered high-neck shirt under a checkered jacket. Farina, in the middle of the group, with a festival ribbon pinned to the lapel of his jacket, leans in as he chats.

The back of the photo notes that Corrado Farina was at the festival as a member of the Jury that year in a photo marked 1972. He directed two horror feature films during the 1970s: They Have Changed Their Face (1971) and Baba Yaga (1973). The American actor Carroll Baker, who was in Cork in the same year as Farina, played the part of ‘Baba Yaga’ – a middle-aged seductress who ultimately controls the main character Valentina, played by Isabelle De Funès, through a doll that she gives her. Baba Yaga was based on the graphic stories written by the Italian Guido Crepax who is famous for his ‘Valentina’ series of books. Crepax is also a keen wargamer and is the author of the first wargames to be published in Italy.

Jane Asher, on the left of the photo, is an English actor, writer and businesswoman with a particular interest in baking. She has worked in film, theatre, radio and television since she was a young child. Her filmography includes the under-rated Deep End (Jerzy Skolimowksi, 1970) (with music by Cat Stevens), Alfie (Lewis Gilbert, 1966) with Michael Caine, and the British sitcom The Old Guys. At the time of this picture, marked 1972, Asher starred in Henry VIII and His Six Wives (Waris Huessein, 1972) where she played the part of Jane Seymour. Asher is a shareholder in the magazine Private Eye and has written many books including best-selling novels and lifestyle books. (Ryan Gilbey, ‘Deep End: pulled from the water,’ The Guardian, 01.05.11)

Sinéad Cusack appears in the archive a number of times. Born in Dublin she is the daughter of the actor Maureen Cusack and the actor Cyril Cusack. She is married to the actor Jeremy Irons who appeared with her in Stealing Beauty (Bernardo Bertolucci, 1996). Most recently she was the winner of the Irish Times Theatre Award for Best Actress for Our Few and Evil Days in 2015. Her film work includes Hoffman (Alvin Rakoff, 1970) with Peter Sellers which was released around the time of this photograph.