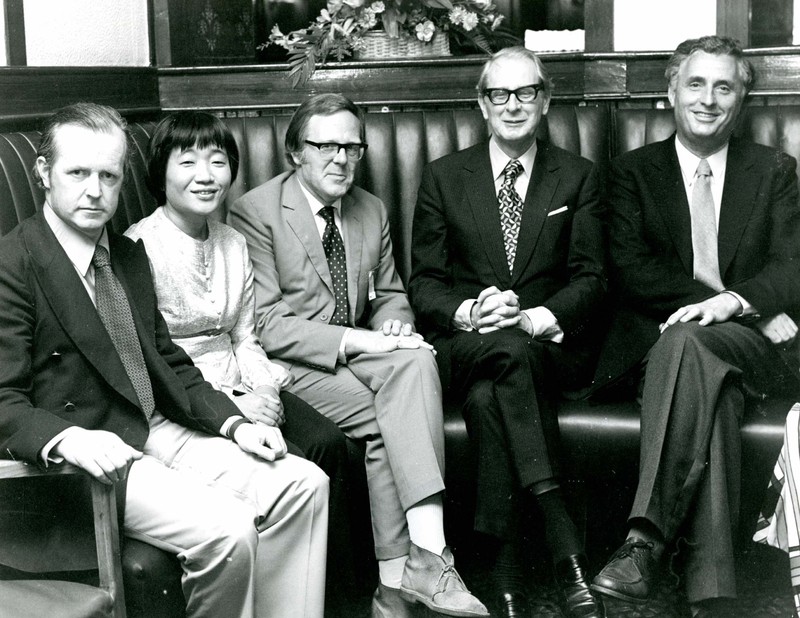 This is a black and white photo marked ‘festival jury’ in a photo dated ‘1960s’. The small group of five sit on a leather-covered high-backed bench, and smile for the camera. While some faces are familiar to us from the archive they remain unidentified and the only jury member identified in the photo is the Irish writer, broadcaster and cineaste Ciaran Carty.

Carty was deputy editor of The Sunday Independent (1961-65) before becoming arts editor and chief critic for The Sunday Tribune (1985-2011). His books include a two-volume biography of the artist Robert Ballagh (Magill, 1986), Confessions of a Sewer Rat: A Personal History of Censorship and the Irish Cinema (New Island Books, 1995) and Writer to Writer – the Republic of Elsewhere (Lilliput Press, 2019), with interviews by Carty of great writers including Saul Bellow, Norman Mailer, and Seamus Heaney. Carty was the director and curator of the annual Hennessy Literary Awards for new Irish writing and maintained and edited the featured writing in national papers over the years including the Sunday Tribune, Irish Independent, and finally The Irish Times. However, following lack of sponsorship after Hennessy withdrew in 2018, New Irish Writing ceased operation in April 2020. (Ciaran Carty, ‘New Irish Writing – a remarkable journey,’ The Irish Times, 30.04.2020.)

In 2008 Carty received the RAAM Support and Service to the Film Industry Award in recognition for his contribution to the Irish film industry. (The RAAM UK and Irish Cinema Industry Awards get their name from the initials of the founding directors Rob Arthur and Anthony Meehan.)