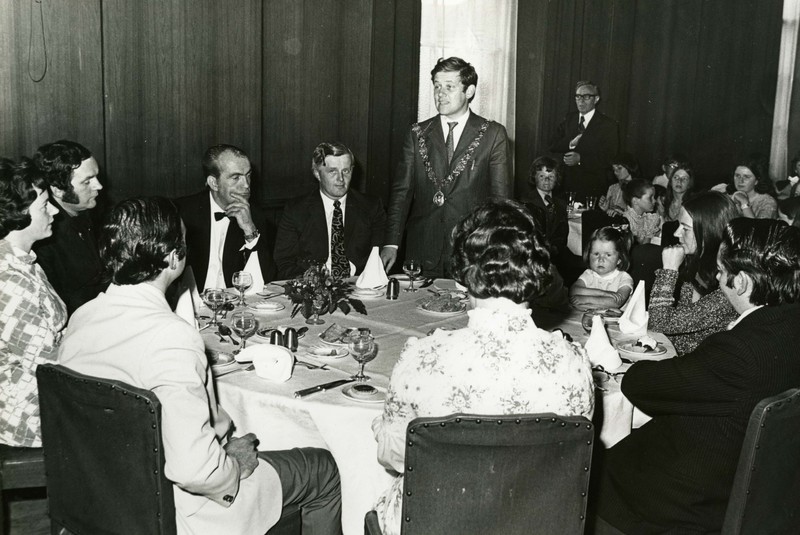 This is a black and white photo of the Lord Mayor of Cork Seán O'Leary at a dinner reception for the composer Bernard Geary and the tenor Kevin Owens. The Lord Mayor, wearing the chain of office, is standing at the round dinner table making a speech while Kevin Owens, on his right next to the festival director Dermot Breen, looks up to the camera as the picture is taken. A young child, arms crossed, also catches the flash of the camera. Geary, with his distinctive sideburns, sits on the far left and glances down at the table while O’Leary speaks.

Seán O'Leary (1941-2006) was an Irish accountant, barrister, judge and Fine Gael politician who served as Lord Mayor of Cork in 1972-73. He studied at the University College Cork before being called to the Bar and was appointed a high court judge in 2003. Kevin Owens, sitting next to O'Leary in this picture, was born in Charleville; he was a well-known radio performer with radio programmes including Melody from Munster, Songs of the Night, and Music of the Nation. Owens worked with Bernard Geary and gained success with his solo performance in Geary’s Mass of Saint Finbarr on the Aisling record label. For many years Owens was a member of the Holy Cross Church Parish Choir in Charleville and in 1994 he received the Papal honor Benemerenti Medal from the then Bishop of Cloyne Dr John Magee for his services to the parish as a singer. His colleague at this table, Bernard Geary, was born in Gurranabraher, Cork in 1934. He studied music at the University College Cork during the 1950s and was encouraged in his compositions by Professor Aloys Fleischmann. Geary composed the Cork Film Festival-commissioned nine-movement Mass of Saint Finbarr for tenor, choir and organ in 1973 which was first performed at the Church of St. Francis in Cork, with Kevin Owens as a soloist and the Cork Film Festival Choir.