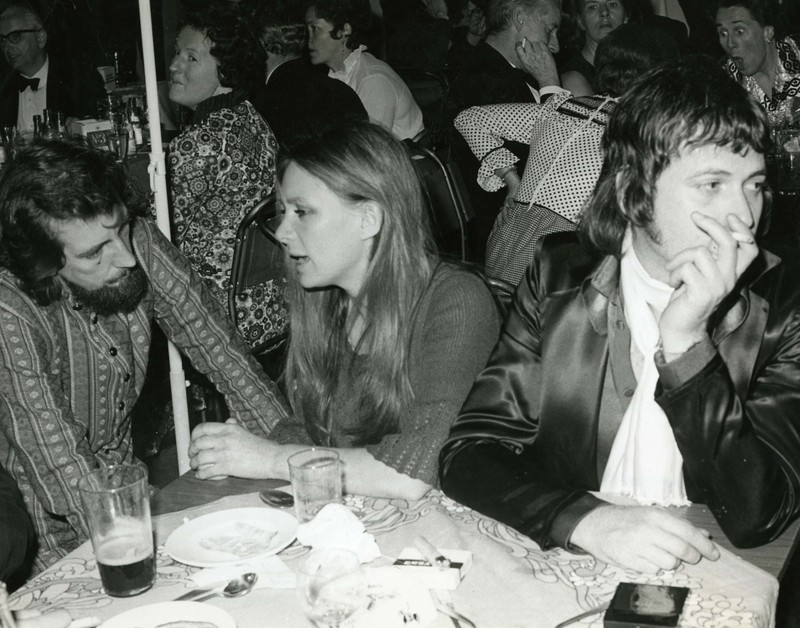 This is a black and white photo of the actors Francesca Annis and Jon Finch with a guest identified as Ivan Ruttle. They are probably sitting under the Harp Lager-sponsored umbrella of the festival club and are chatting, drinking, and smoking as are the animated guests who sit at tables around them.

Jon Finch, at the right of the photo in a leather jacket pulling on a cigarette, was an English film and stage actor born in 1942. He was a handsome in demand actor who achieved some notoriety for turning down plum roles when offered them due to a self-proclaimed lack of ambition, such as the chance to replace Sean Connery and play James Bond in Live and Let Die (Guy Hamilton, 1973) (the part went to Roger Moore instead). In the early 1970s Finch played supporting roles in Hammer Horror productions The Horror of Frankenstein (Jimmy Sangster, 1970) and The Vampire Lovers (Roy Ward Baker, 1970) with Dawn Addams, a regular visitor to the Cork Film Festival in its earlier days, with her then-husband Prince Vittorio Massimo. But it was for his Shakespearean roles Finch would become well known. Most famously he played Macbeth in Macbeth (aka The Tragedy of Macbeth) (Roman Polanski, 1971) alongside his companion in this picture, Francesca Annis, as Lady Macbeth. Finch also starred in Alfred Hitchcock’s Frenzy (1972) as well the BBC television productions Richard II (1978), Henry IV, parts one and two (1979), and as Don Pedro in the BBC’s Much Ado About Nothing (1984). His final film role was in the historical drama Kingdom of Heaven (Ridley Scott, 2005) alongside Orlando Bloom and Eva Green. Finch died in 2012, age 71.

Francesca Annis, chatting to her companion in this picture, is also an English film and stage actor with a prolific film career. At the time of this photo she had just completed Macbeth (1971) with Jon Finch, directed by Roman Polanski, whose wife Sharon Tate had recently been murdered in Hollywood by followers of Charles Manson. The film was financed by the Playboy magazine editor Hugh Hefner as mainstream studios refused to finance it given Polanski’s mental state and yet, despite its critical mauling at the time, the film has gone on to garner plaudits for its somewhat accurate depiction of a bleak violent world. As Polanski notes: … [the film] is violent. But the play is violent. And life is violent too.