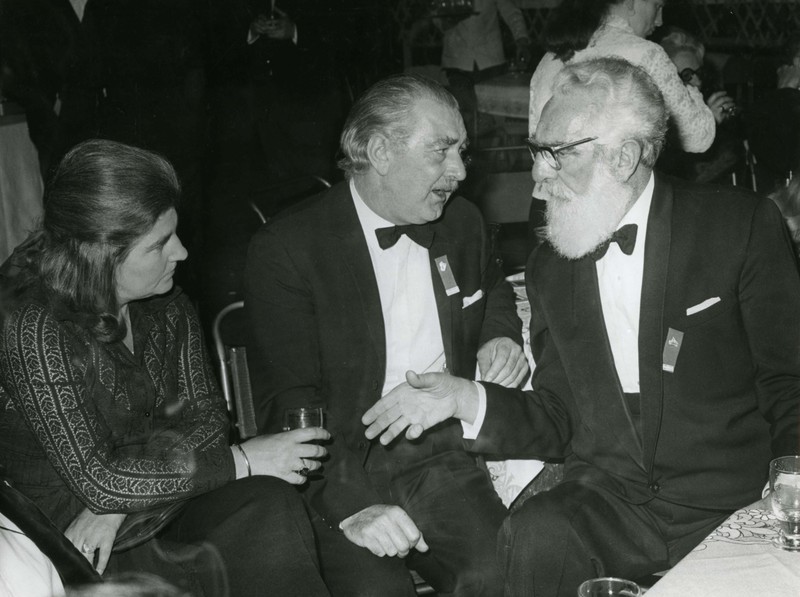 This is a black and white photograph of the actor Noel Purcell in conversation with the Irish tenor Josef Locke and probably his wife Carmel Dignam. Purcell and Locke, in formal suits, accessorised with a festival ribbon, are huddled together in conversation with Purcell gesticulating with his hand outstretched towards Dignam who looks on, glass in hand.

Noel Purcell (1900-1985) had a distinguished career on stage and in film. However he did gain some recognition as a singer for his rendition of The Dublin Saunter, a song composed for him by the songwriter Leo Maguire (1903-1985). Purcell was given the Freedom of the City of Dublin in June 1984, a short time before his death in 1985.

Derry-born Joseph McLaughlin, known professionally as Josef Locke, was born in 1917 and was particularly successful for his singing during the 1940s and 1950s. He worked as an Irish Guard and served abroad with the Palestine Police Force, before returning to Ireland to work for the Royal Ulster Constabulary in the late 1930s. He appeared in a small number of films, as himself, including Holidays with Pay (John E Blakeley, 1948) and What a Carry On! (John E Blakeley, 1949). However it is for his singing he is best remembered – in particular for his recordings of Blaze Away, The Town I Loved So Well, and Hear My Song. He had somewhat protracted legal wranglings with the British tax-man over the years – and would successfully appeal various court sentences and demands. In later years Locke was honoured with recognition from the Variety Artists Trust, The Late Late Show, and an award-winning film based on his life, Hear My Song (Peter Chelsom) in 1991, a few years before his death in 1999.