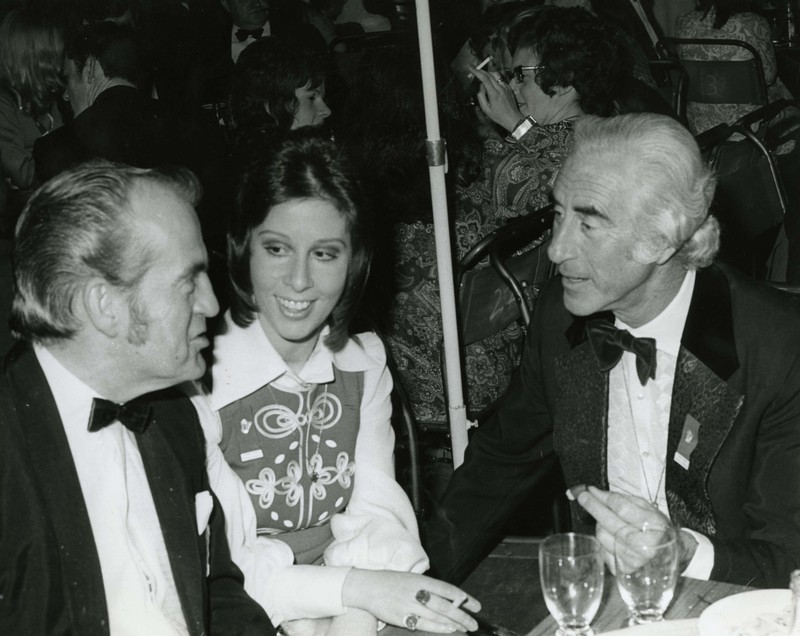 This is a black and white photo of the singer Helen Shapiro in conversation with the actor Ferdy Mayne and festival director Dermot Breen. They are probably at the Harp Lager-sponsored festival club and, as with the convivial crowd around them, they drink and chat, cigarette in hand.

Helen Shapiro, in a white blouse and embroidered top accessorised with a festival ribbon, was a singing sensation in her day. Born in East London in 1946, she was a British singer whose repertoire included the blues, jazz, gospel and pop music. By the age of 15 she was England’s top recording star with You Don’t Know and Walking Back to Happiness earning her two gold discs. She toured and performed with the Beatles; John Lennon and Paul McCartney wrote the song Misery for her but her then-management refused to let her record it. Shapiro’s film career was brief and she played herself in Play It Cool (Michael Winner,1962) and the lead female role in Its Trad, Dad! directed by Richard Lester (1962) who went on to direct the Beatles’ film Hard Day’s Night (1964). Her stage career includes the West End play Oliver by Lionel Bart and the part of Sally Bowles in Cabaret. Later she toured with the British jazz trumpeter Humphrey Lyttelton and his band between 1984 and 2001, as well as touring with her one-woman show Simply Shapiro. Shapiro published her autobiography Walking Back to Happiness in 1993.

Ferdy Mayne, on the right, cigar in hand, faces Breen as they chat. A festival ribbon is pinned to the left lapel of his jacket. Mayne had a prolific film and theatre career and achieved international recognition for his various portrayals of suave criminals, Nazi officers, or Hammer horror roles including head vampire in The Fearless Vampire Killers (Roman Polanski, 1967) starring Sharon Tate; Where Eagles Dare (Brian G Hutton, 1968); and The Vampire Lovers (Roy Ward Baker, 1970) starring Kate O’Hara and Dawn Addams (who was a regular visitor to Cork in the early days of the film festival with her then-husband Prince Vittorio Massimo).

Mayne later featured in Trip to Vienna (Edgar Reitz, 1973) with Hannelore Elsner, who also came to Cork around the same time as this photo. (While this photo is marked 1970 it is possibly 1972 based on other items in the archive.) His final film role was as General Karl von Weber in the neo-Nazi political thriller The Killers Within (Paul Leder, 1995) before he returned to England, where he died in 1998 following the onset of Parkinson’s Disease. (Tom Vallance, 'Obituary: Ferdy Mayne', The Independent, 04.02.1998.)