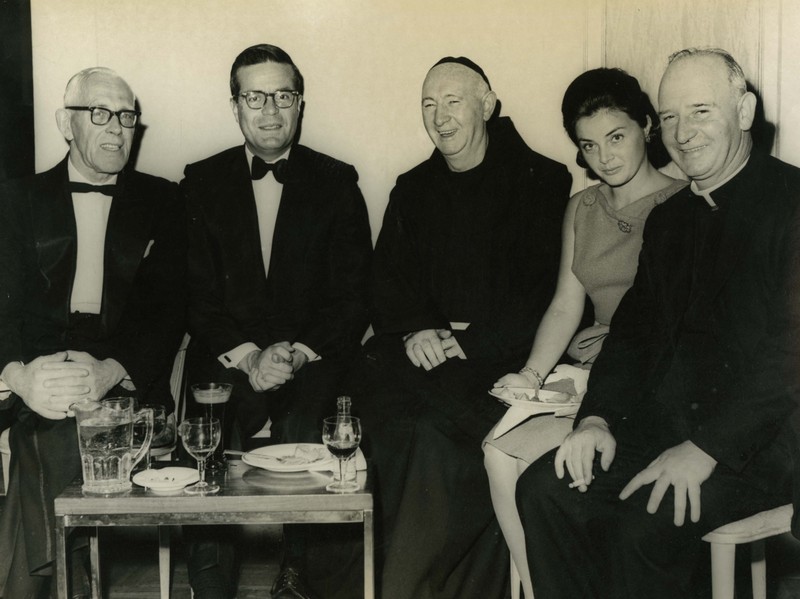 This is a black and white sepia-toned photograph of Ted Sorensen, the political speechwriter behind John F Kennedy’s American presidential campaign in 1960. He is seated second from left, in glasses and dickie bow, with hands clasped in front of him. The other guests in the picture are not identified apart from a provisional Father Cormac, cigarette in hand, on the far right. The group is seated around a small square table, laden with drink, and looking up at the camera smiling.

Theodore ‘Ted’ Sorensen was a close aide to President John F Kennedy whose inaugural address for Kennedy called on the American people to “ask not what your country can do for you, ask what you can do for your country.” In October 1962, Sorensen was involved with the growing missile crisis in Cuba when Kennedy asked him, and Bobby Kennedy, who was the Attorney General at the time, to draft a letter to the Soviet leader Nikita Khrushchev. This letter was critical in persuading the Soviets to withdraw their missiles from Cuba, potentially averting war between the superpowers. The back of the photo states that Sorensen was a future CIA director – he was indeed nominated by President Jimmy Carter in 1977 for the post of CIA director but the nomination was killed by conservative critics who cited, amongst other reasons, his youthful claim to have been a conscientious objector. He also worked with Barack Obama on his U.S. presidential campaign.

An Irish-produced documentary film Here Was Cuba (Emer Reynolds, John Murray 2013) tells the story of the Cuban Missile Crisis through the central characters of Kennedy, Castro, and Khrushchev. Many interviews were shot during 2010 for research purposes, including with Ted Sorensen. He died soon after in New York, age 82, following a stroke. Here Was Cuba was nominated for a prestigious Grierson Award in the category of 'Best Historical Documentary' in 2014.