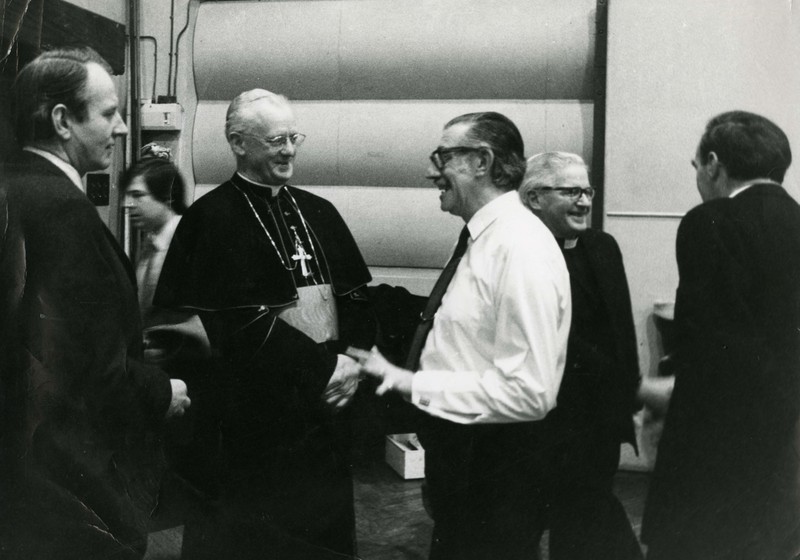 This is a black and white photo of the English film and television composer and conductor Philip Green in conversation Cardinal John Carmel Heenan. The photo is undated but it was probably taken in 1971 during the recording of St Patrick’s Mass which was televised live from the Franciscan Church in Cork that year. Also in the picture is the Scottish tenor Canon Sydney MacEwan who featured in the recording with the choir of Trinity College Dublin - Trinity Chorale.

Born in East London in 1911 Philip Green had an extensive career in film-music composition. He was appointed the musical director for the Rank Organisation, whose many stars came to visit the festival in its earlier years, and composed hundreds of film scores and themes for popular television programmes during his career. However his conversion to Catholicism in the early 1970s contributed to his creation of this Mass, which he composed, produced, and recorded in 1970 before bringing it to Cork in 1971. Seemingly the Mass was a personal tribute of thanksgiving to both the Church and Ireland. He died in 1982 but his recording of St Patrick’s Mass, performed by Canon Sydney MacEwan and Trinity Chorale, is still available and can be streamed on-line.

Canon MacEwan (1908-1991) sang traditional Scottish and Irish songs and during the 1940s-50s he toured North America, Australia, and New Zealand, trying to raise funds for the restoration of parish buildings. He studied at the Royal Academy of Music before becoming a priest and used the funds he made for his music to fund his religious work. MacEwan recorded almost 40 records before his death in 1991 and in Ireland we might know him best for his rendition of Queen of the May and Bring Flowers of the Rarest played over our radios every year on 1st of May. In 1962 Eamon Andrews featured him on the BBC show This is Your Life.