Women and the Archive 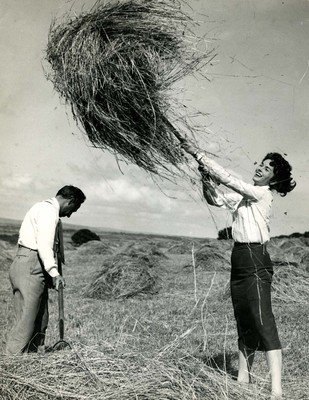 A range of femininity is displayed in the festival archives, from posed promotional shots with exotic visiting “starlets” to the more casual photographs of the local women who came to see them. The images from the early years of the festival are very much “of their time” in the way that women are depicted. The camera focuses on glamour and fashion and many of the women have clearly been asked to pose in ways that accentuate their figures, pandering to one of the most cited concepts in film studies, Laura Mulvey’s “male gaze”. But rather than providing images where women are simply objects of spectacle observed only by men, they also capture women as agents of action – doing, working, playing and looking - observed by other women. We see female actors, directors, staff and dignitaries enjoy and promote the festival. We also gain insight into the values and sartorial preferences of the audience, as these are documented in the archive alongside the filmic references. This project seeks to highlight the crucial role played by women in the early years of the festival, and while we might need to contextualise some of these images in the current cultural climate, it is vital that they are shared and discussed. These archival gems belong to the people who supported and attended the festival: the people of Cork. As the archive grows, more and more of these images will be returned to the general public, to chart this crucial part of Cork’s proud and vibrant cultural heritage.

For a more detailed treatment, see "Women and the Archive: The Early Years of the Cork Film Festival", prepared for this exhibition by Dr Ciara Chambers (Dept. of Film & Screen Media, University College Cork): https://cora.ucc.ie/handle/10468/9827