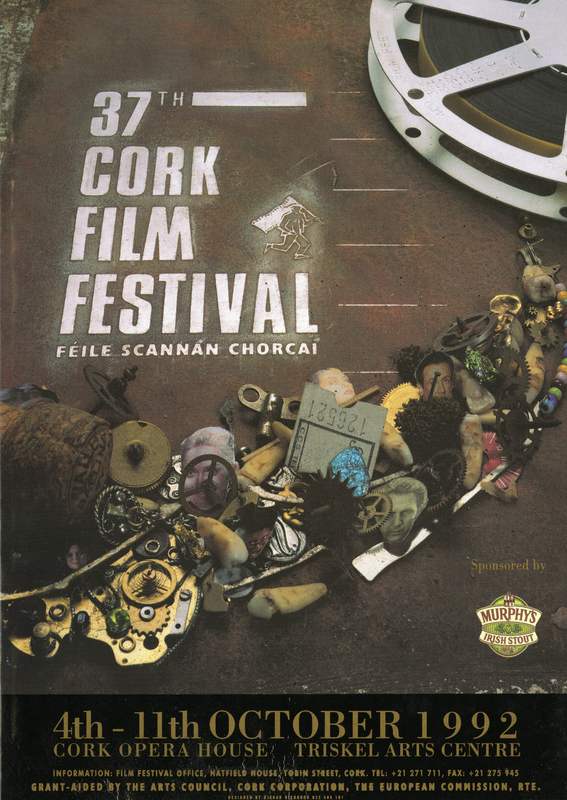 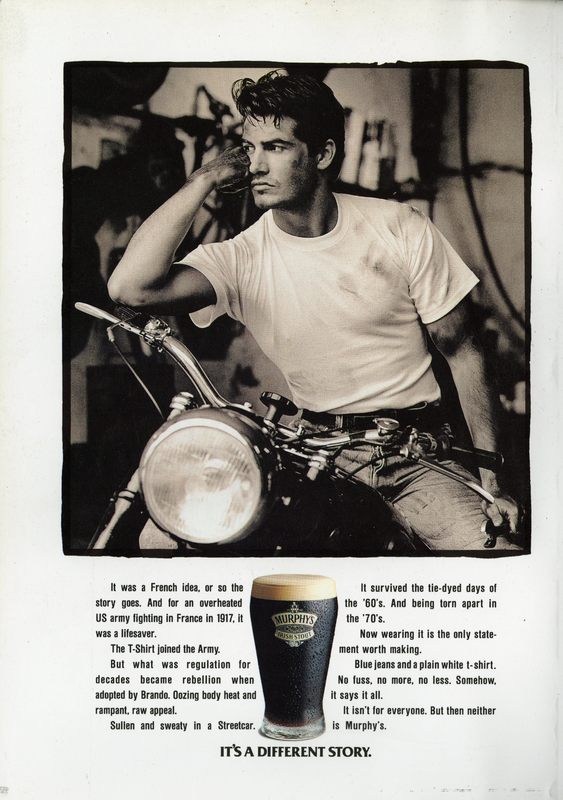 The 1992 festival programme cover depicts a photographic montage of a gritty realist scene comprising a large silver film reel in the upper right corner against a concrete distressed-coloured grey/blue-black background tinted with reddish tones. The lower half of the programme depicts a scene strewn with film-like debris including torn cinema tickets, watch parts, teeth, foil sweet-wrappers, small cogs and wheels, a champagne bottle cork, a radiator key, a bracelet with bright beads as well as pictures of cinema actors including Sharon Stone and Sylvester Stallone.

The back cover is an advertisement for Murphy’s Irish Stout (the main festival sponsors). The main image is a photo of a handsome man dressed in a plain white t-shirt, stained with oil, and jeans sitting astride a (possibly) Triumph motorbike. He is leaning forward, gazing off to the distance on his right. He has a spanner in his left hand and his hands (and left cheek) are oil-stained. The black and white photo references a similar pose by Marlon Brando in the 1953 movie The Wild One (László Benedek, 1953). The lower half of the page is given over to text describing the iconic status of the plain white t-shirt and how its status is similar to that of Murphy’s stout. A full pint of black stout, with its cream head, is centred amidst the text. The glass, with Murphy’s logo across its front, is dotted with condensation.

The 1992 programme is a soft card-bound programme measuring 21cm x 30cm. The spine is glue-bound and it has 76 numbered pages.

Note: The introduction by Donal Sheehan (programming director) and Fran Bergin (administrative director) reference Michael Hannigan and his recent departure from the director’s chair and thank him for his work. The introduction also references an exhibition that the film festival held that year of archive material relating to the Festival. It also notes the success of the first Irish Lesbian and Gay Film Festival held in 1991.