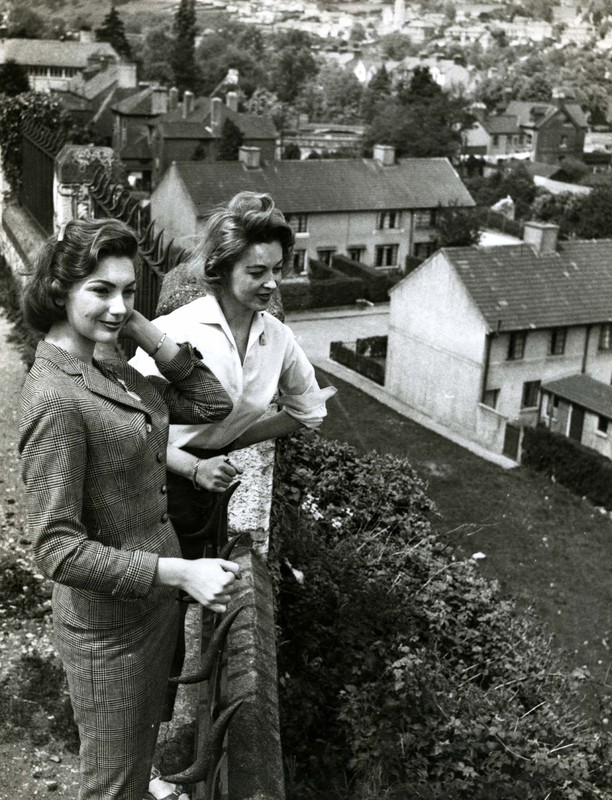 This is a black and white photo of the Yugoslav-born Italian actor Sylva Koscina, standing with an unidentified companion, looking over an elevated street view from Connaught Avenue in Cork City. Koscina is wearing a Glen-check two-piece suit and is shown fixing her short dark hair with her left hand whilst smiling and looking out into the distance. Her companion, dressed in a light-coloured blouse with a film festival pin attached, is also admiring the view. Connaught Avenue is not far from University College Cork and is known for its Boer War Memorial which was erected in memory of those who lost their lives during the South African war of 1899 to 1902.

Koscina (1933-1994) has an extensive filmography including parts in mostly Italian genre movies including The Railroad man (Pietro Germi, 1956) (which was shown at the Cork Film Festival in 1956), Guendalina (Alberto Lattuada, 1957) and Hercules (Pietro Grancisci, 1958) for which she gained international attention. Koscina acted for Hollywood-produced movies on a few occasions including The Secret War of Harry Frigg (Jack Smight, 1968) with Paul Newman and the Italian-American war film Hornets' Nest (Phil Karlson, 1970) with Rock Hudson. Before her work in film Koscina was a fashion model as well as a physics student at the University of Naples. Her final film appearance was in Kim Novak is on the Phone (Enrico Roseo, 1994) before she died later that year from breast cancer.