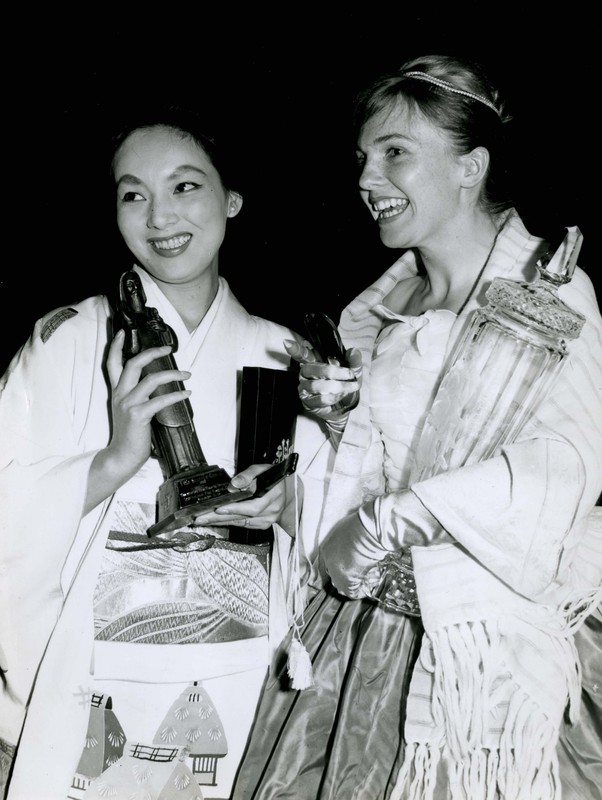 This is a black and white photo of the Japanese actor and film director Sachiko Hidari with a colleague, both of whom are holding awards. Standing on the left Hidari is holding a St Finbarr statue, the design of which is attributed to the Cork-born sculptor Séamus Murphy. Her companion, dressed in a taffeta-style evening gown and striped linen-style scarf, is cradling the Waterford Glass trophy in the crook of her left arm. They are both looking right smiling broadly.

Hidari is wearing a light-coloured kimono which is a traditional formal Japanese robe, usually made of hand-dyed silk and worn on special occasions. Hidari's kimono is tied at her waist with a metallic-coloured wide sash (known as an Obi) which is wrapped around her waist and tied in the front with a bow. The lower half of the kimono is elaborately designed with images of simple huts which might be a reference to traditional Japanese tea houses.

Sachiko Hidari (1930-2001) was a Japanese actor and film director. Born in the Toyama Prefecture she became an actor in 1952 when she was 22 years old. The Historical Dictionary of Postwar Japan (William D Hoover, 2018) notes that she received international recognition in 1957 when she received the award for best actor at the Cork Film Festival for her role in Kamiska Shiro No Hanzai (The Crime of Shiro Kamisaka) (1956), directed by Hisamat-su Seiji. By all accounts, she was an independent-minded woman who stepped outside the passive social role expected of Japanese women during this era. In 1977 she was the first Japanese woman to direct a film with Töi Ippon No Michi (Far Road) in which she also starred. It was the story of a railroad worker's wife set over the course of 30 years and was financed by the Japanese National Railway Workers' Union as it was difficult to get funding from the big studios (The New York Times, 12.02.1978).

We note this photo is dated 1960 but Sachiko Hidari was given her award for best actor in 1957, so we bear this in mind. Interestingly, if this photo is from 1957 it was taken a year after she was threatened in Japan by gangsters from the yakuza crime syndicate. The yakuza were believed to have been hired by the Nikkatsu Film Company to intimidate her for daring to become an independent freelance actor outside of their control (The New York Times, 12.02.1978).