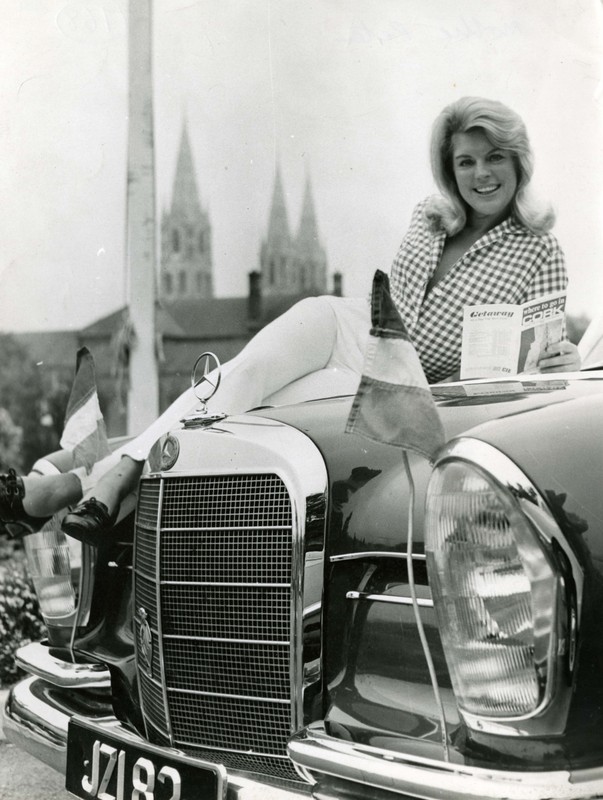 This is a black and white photo of the English actor Mollie Peters sitting on the bonnet of a classic Mercedes-Benz car. Dressed in white trousers and a checkered shirt, Peters is leaning back and holding a local guide book of Cork while smiling at the camera; her legs dangle over the chrome trim of the car’s radiator grill, next to the iconic Mercedes-Benz three-pointed star. Two small Irish flags adorn the car either side of the grill which might suggest that this was the Lord Mayor’s car.

Behind Peters in the distance we can see the imposing three spires of St Fin Barre’s Cathedral. Designed by William Burges, and built 1827-81 from Cork limestone, the cathedral is located on the south side of the River Lee in Cork City. Burges designed it to be compact in a French Gothic style, with a narrow interior that soars to a great height. Its three spires stand out for their intricate architectural details including gargoyles and such embellishments throughout. Approximately 844 sculptures adorn the interior and exterior including 32 gargoyles and the twelve Apostles of The Last Judgement at the Tympanum over the entrance door. In this photo we cannot really make out the copper gilt-edged Resurrection Angle, also known fondly as the 'Goldie Angel' by locals, which adorns the main spire in place of a cross - a gift from the Victorian architect to the city.

Mollie Peters was the stage name of Vivien Mollie Humphrey, an English actor best known for her role as Nurse Patricia Fearing opposite Sean Connery's 007 in Thunderball (Terence Young, 1965). She was infamous for being the first Bond girl to take off her clothes on-screen - earning the franchise its first X-rating. Peters had a short-lived film career due mainly to contractual disagreements with her agent which forestalled her career.