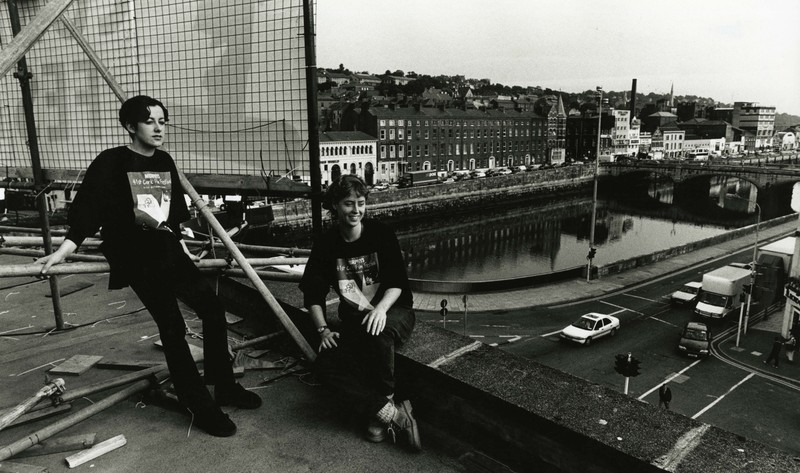 This is a black and white photo of festival staff, dressed in film festival promotional sweatshirts, on the roof of the Cork Opera House. They are posing amidst the roof-top detritus of abandoned steel poles and advertising hoarding while below them the hustle and bustle of city life continues. One of the girls sits on the wall parapet while the other leans insouciantly against a hoarding pole; they seem to be on the roof of the 60-foot fly-tower of the Opera House. They are both wearing dark-coloured tops, with the festival logo for the 41st Cork International Film Festival which took place in October 1996, which helps us date this photo.

The Cork Opera House was conceived in 1852, following the Cork Exhibition, and opened in 1855. The building was originally called the ‘Athenaeum’ and eventually renamed Cork Opera House in 1877. It burnt down in 1955 and was reopened by President Éamon de Valera in October 1965. In this reconstruction, it retained a somewhat bleak wall of brick, with the equally bleak fly-tower used to accommodate scene changes. In 2003 renovation works on the façade of the building, and the surrounding Emmet Place, was completed but did not impact upon the fly-tower. The fly-tower infamously provided the backdrop to the iconic Toyota roof sign which occupied 3 sides of the tower on the north, east, and west. In 2019 the Toyota sign was replaced by UCC signage in a new collaboration with UCC, and the old Toyota letters, at 1.5 metres tall, were recommissioned by the Greek artist Bill Balaskas. Balaskas transformed the six Toyota letters into a public art installation called 'Red Air'.

The panoramic view from the fly-tower here looks out towards Emmet Place below, which has since been redeveloped into a plaza-like square, and along Lavitts Quay. Traffic lines up across the River Lee at Camden Place, from the direction of the three-span St. Patrick’s Bridge beyond.