Barbara Vance at a dinner party at the Metropole Hotel 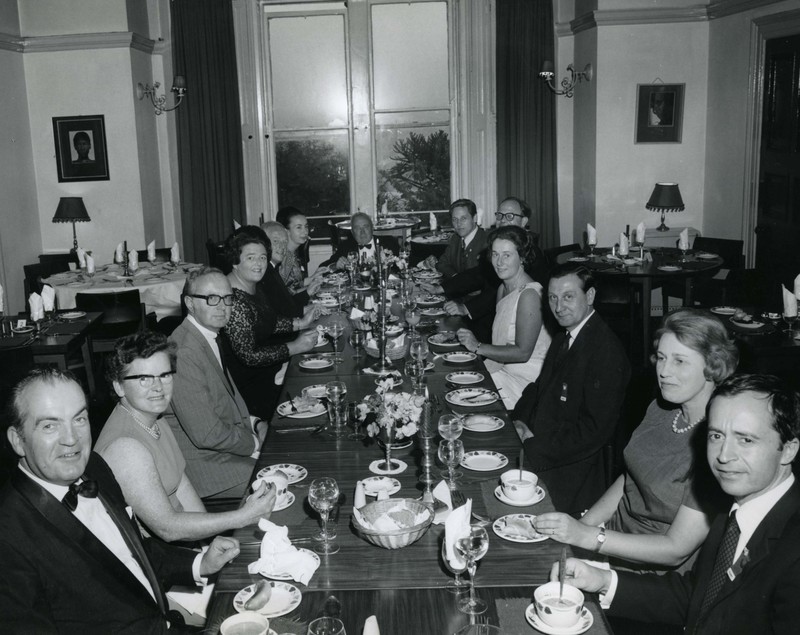 Barbara Vance at a dinner party at the Metropole Hotel

This is a black and white photo of a dinner, or lunch, party attended by Barbara Vance who is the only guest identified at the back of the photo. The thirteen guests, all of whom are smiling for the camera, sit on either side of a long table with the Fianna Fáil politician, Gus Healy, seated at its head. The wooden table is adorned with candlesticks and the guests are having soup and a roll served on patterned tableware.

The identified guest, Barbara Vance, was the wife of Douglas Vance, the manager of the Metropole Hotel located on MacCurtain Street, Cork. The Metropole was designed by the architect Arthur Hill and was opened in 1897. The hotel was originally run by Jimmy Musgrave, after whom Musgrave (now Irish Independent) Park was named for his dedication to Rugby. Until the mid-1950s it was known as Ireland's finest 'dry hotel' because the owners, the Musgraves, believed alcohol should not be served; the ban was lifted in 1956 at the behest of the manager Douglas Vance - just in time for the first Cork film festival.

The hotel occupied the upper floors of the building with the ground floor and basement let out for retail. Two shops on either side of the entrance included the famous Turkish Delight sweet shop Hadji Bey run by Harutan Batmazian who came to Cork from Armenia in 1903. Lawson's Outfitters occupied the other unit and the name can still be seen on the hotel's façade today. Edward VII supposedly took high tea on the roof of the hotel when he visited Cork in 1903 for the Great Exhibition of Cork. Douglas Vance took over the running of Metropole Hotel in 1944 and made headlines around the world when he refused a request from the English actor Dawn Addams for a bath to be filled with milk, noting that the Cork people would be appalled since they found it hard to make ends meet at the time. (Irish Examiner, 25.04.2017.)