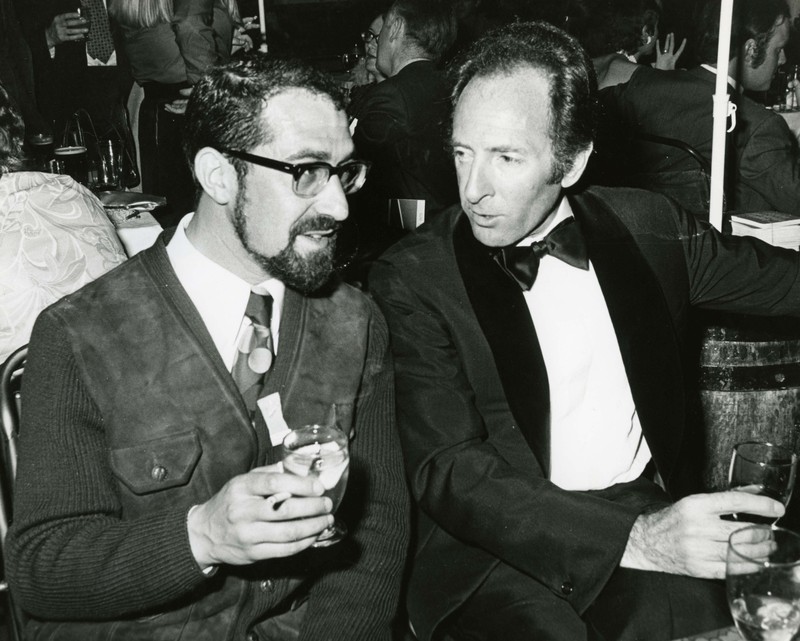 This is a black and white photo of the Irish film director and documentary maker Louis Marcus sitting with an unidentified companion. Marcus on the left, with his distinctive glasses and beard, is turned slightly towards his companion, engaged in conversation. They are seated amongst a convivial crowd, drinking and smoking, at tables made from empty beer kegs with umbrellas used for cover.

Louis Marcus was born in Cork City to an Irish Jewish family. His grandfather Louis Roseberg came to Cork in 1882, from Akmian, North of Lithuania, fleeing persecution from the Russian Empire. Cork Jews were often referred to as Akmajianites. Marcus began his career in Dublin as assistant director on Mise Éire (George Morrison, 1959) and Saoirse? (George Morrison, 1965) and would continue to work on Gael-Linn documentaries until 1973. He was nominated for the Academy Award for Best Documentary in 1974 for Children at Work (Páisti ag Obair), and in 1976 he was nominated for Best Live Action Short Film at the 48th Academy Awards for Conquest of Light (1976) which detailed how Waterford Glass is made with an emphasis on the aesthetic nature of the process.

Marcus is a member of Aosdána (the Irish Association of Artists limited to 250 individuals, founded in 1981 by Charles Haughey) and an honorary member of the Royal Hibernian Academy. In 2011 he was awarded a special prize for his outstanding work in the Irish language at the Screen Directors Guild of Ireland (SDGI) Annual Meeting of Directors including Oliver Hirschbeigel, Dearbhla Walsh, Lenny Abrahamson and Ciaran Donnelly. His first documentary film The Silent Art (1958), on his friend the Cork-born sculptor Séamus Murphy (1907-1975), is of particular interest to us as Murphy designed the bronze St Finbarr statuette that was presented to prizewinners at the Cork Film Festival for some years. The Silent Art (18 mins.) was shown at the festival in 1959, with music by Bernard Geary and Declan Townsend, and commentary by festival stalwart Dan Donovan.