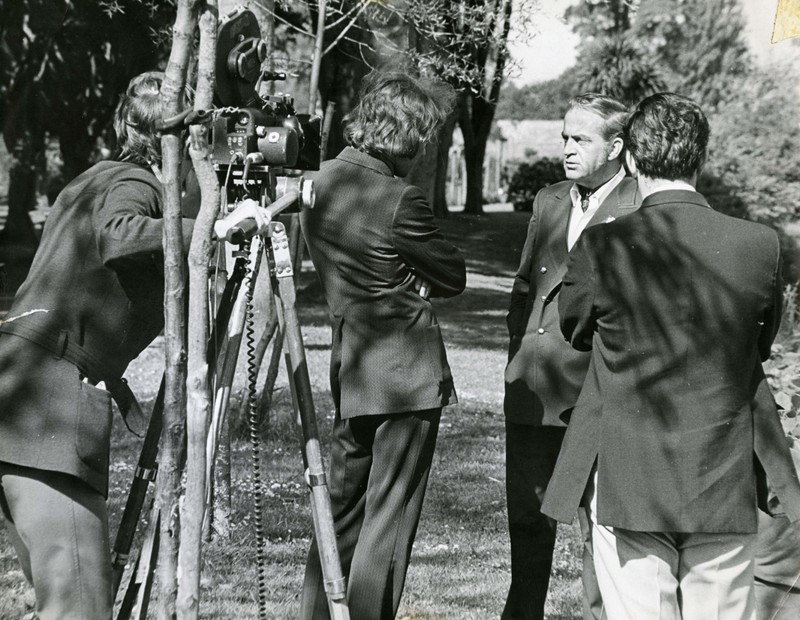 This is a black and white photo of the festival director Dermot Breen in Fitzgerald’s Park giving an interview to a BBC television crew in the late 1960s. The interview is taking place on one of the tree-lined avenues that dot the park amidst its landscaped gardens. Breen is shown talking to the interviewer, hands in pockets with a cravat tied at his neck; the brass buttons on his jacket glint in the sunlight. We see the three-man television crew from behind and note the belted-jacket on one of the crew suggesting that the photo was taken in the late 1960s or early 1970s.

The park itself is one of Cork’s finest spaces. It originated with the 1902-03 Cork International Exhibition which took place on 8 hectares of reclaimed marshlands along the Mardyke area of Cork City. Organised by the then Lord Mayor of Cork, Edward Fitzgerald, the exhibition was visited by Edward VII and Queen Alexandra and no expense was spared constructing elaborate exhibits including a switchback railway, a water chute, and a pavilion for the park. A decision was made to donate the grounds to Cork Corporation after the exhibition and the new public space was named after Edward Fitzgerald.

The legacy of the exhibition can still be seen in the park today in the shape of the President’s and Lord Mayor’s Pavilion (1902) at the entrance to the Park. It was probably designed by the architect Arthur Hill, who also designed the Metropole Hotel. Interestingly Hadji Bey launched their Turkish Delight at the Exhibition and had a shop front at the Metropole Hotel so we might guess that Arthur Hill had a hand in that collaboration too. The Shrubberies House, now Cork Municipal Museum, was used as municipal offices by the Cork Corporation as headquarters to co-ordinate the rebuilding of the City Hall after it was burnt down during the Burning of Cork, by the British Auxiliaries, in December 1920. Under the aegis of Aloys Fleischmann the park set up a Cork Sculpture Park Committee in the mid-1960s, and thanks to that we can see many examples of work by the sculptor Séamus Murphy, including Dreamline and Michael Collins, as well as work from other artists including Marshall Huston and Joseph Higgins. (Kieran McCarthy, Secret Cork, Amberley Press, 2017.)