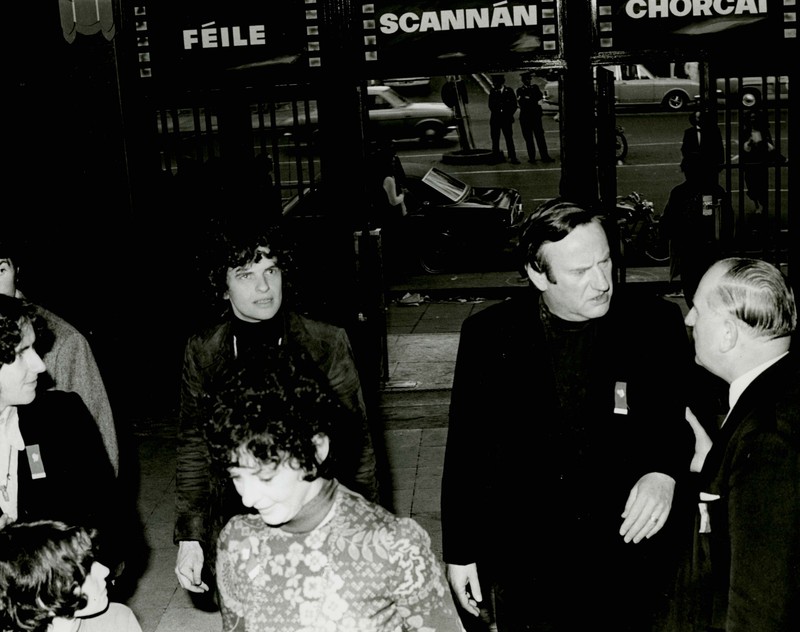 This is a black and white photo of the English screenwriter Wolf Mankowtiz and companions at the Savoy Cinema in Cork. The imposing figure of Mankowitz, dressed in all black, stands on the right of the photo, slightly turned to his left whilst in conversation with another man. To the left of the photo are two unidentified companions, a younger man with curly dark hair, wearing a velvet jacket accessorised with a scarf at his neck, and in front of him we can just make out the features of a young lady with similar dark curly hair, looking down with a smile on her lips.

Mankowitz (1924-1998) was an award-winning English screenwriter and author known for his novels, plays, and screenplays. Mankowitz was of Jewish descent, born in the East End of London. However, following altercations with the English revenue, he moved to Ireland to avail of Charles Haughey’s generous tax policy towards artists and settled in Cork in 1971. He was a successful screenwriter in the 1950s and wrote screenplays for his own works and adapted others including A Kid for Two Farthings (Carol Reed, 1953) and The Millionairess (Anthony Asquith, 1960) starring Sophia Loren and Peter Sellers. He was one of the screenwriters on the first James Bond film Dr No (Terence Young, 1962) but asked for his name to be removed from the credits as he thought it poor; he also collaborated on the Bond movie Casino Royale (Martin Campbell, 1976).

In 1972 Mankowitz wrote and directed The Hebrew Lesson starring Milo O’Shea, Patrick Dawson, and Harry Towb (who can also be found in this archive). The film is set in Cork in 1921 during the War of Independence and is about the friendship between an IRA man, escaping pursuit from the Black and Tans, and an elderly man at a synagogue. Mankowitz wrote the screenplay having being told the story about an IRA man hiding in a small synagogue in Dublin’s Lennox Street (TCD Irish Film and TV Research Online: tcd.ie/irishfilm).  It was shown at the Cork Film Festival in 1972 and, despite the photo being marked 1960s, might suggest that the photo was taken around then.

Interestingly the Guardian reported that the British M15 kept a security file on Mankowitz for more than a decade suspecting that he was a possible communist agent following his marriage to Ann Seligmann, in 1944, as she was a communist party member. The investigation was dropped when the M15 informant insisted that Mankowitz’s leftwing sympathies had disappeared noting that “He comes to the college every morning with a copy of the Times.” (Alan Travis, The Guardian, 26.08.2010.)