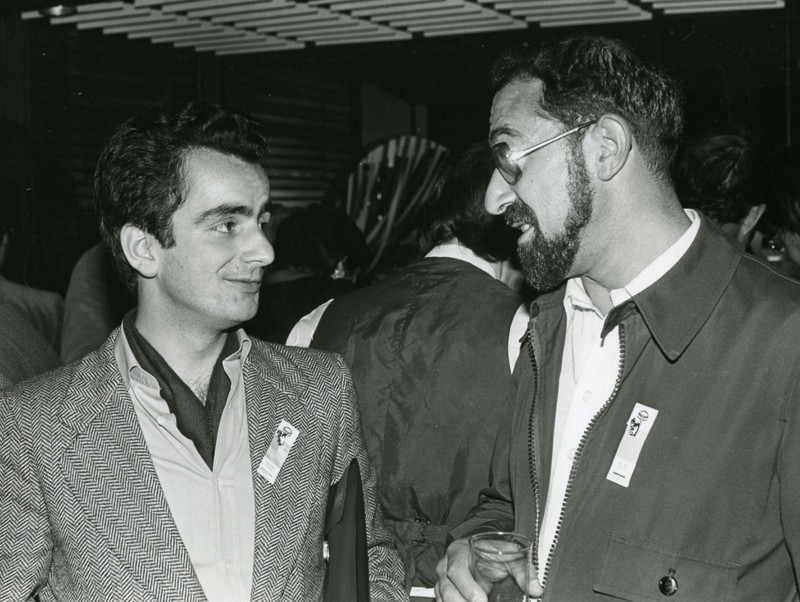 This is a black and white photo of Patrice Legendre and Louis Marcus in conversation. A young Legendre, in a herringbone tweed jacket, is shown in profile listening to a Marcus on the right. Both are wearing festival pins on their jackets and if we zoom into those pins we can see that the pin on Legendre’s jacket is marked ‘delegate’ and the pin on Marcus’ jacket is marked ‘Jury’. The room behind them is crowded and, with Marcus holding a drink in his hand, we might guess that this is a reception held for the delegates of the film festival.

There is no information to corroborate the identity of Legendre but we appreciate the presence of local man turned film director, Louis Marcus, at the festival. Marcus was born in Cork City to an Irish Jewish family. He attended University College Cork before beginning his career in Dublin as assistant director on Mise Éire (George Morrison, 1959) and Saoirse? (George Morrison, 1961). Marcus would continue to work on Gael-Linn documentaries until 1973. His first documentary The Silent Art (1958) on his friend the Cork-born sculptor, Seamus Murphy (1907-1975), is of particular interest to us as Murphy designed the bronze St Finbarr statuette that was presented to prize-winners at the Cork Film Festival for some years.