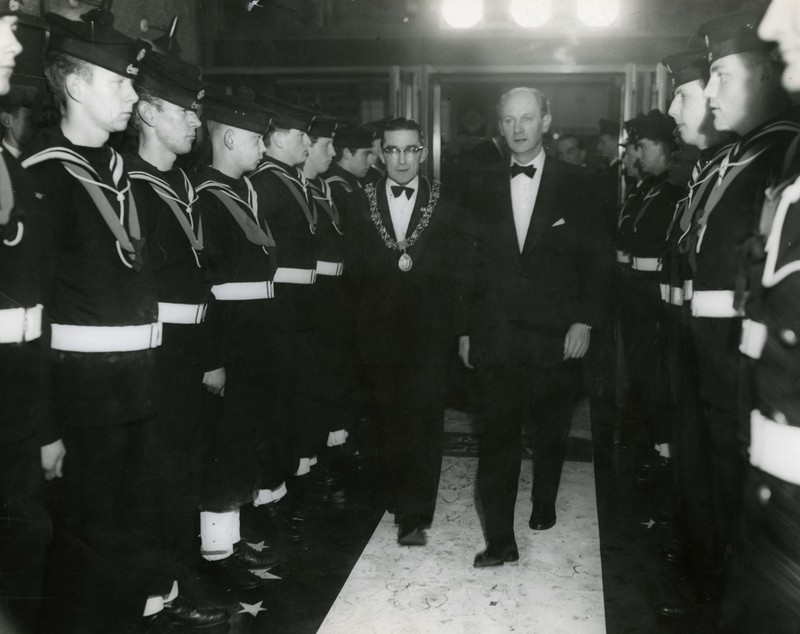 This is a black and white photo of the Lord Mayor Seán Casey walking with Jack Lynch who would have been Taoiseach at the time of this photo in 1966. They walk down a narrow corridor closely flanked either side by young sea cadets in full uniform.

This is a rare photo of Seán Casey in the archive; he was an Irish Labour Party politician who served as Lord Mayor of Cork on three occasions: in 1956, 1962, and 1966 as in this photo. He was elected to Dáil Éireann as a Labour Party TD for Cork on four occasions before his untimely death in 1967, age 45. He had a memorable meeting with President John F Kennedy in 1963 when the President came to Cork. They travelled to the Cork City Hall in an open-top car and he gave a speech of which Kennedy noted “Once again I’m reminded that the Irish have not lost their ability to speak.” Within four years of their meeting both President Kennedy and Seán Casey would be dead. ('The Proud Son', Irish Independent, 15.06.2013)

In this photo Casey walks alongside local man, Jack Lynch, who was born in Cork in 1917. Lynch went to school in the North Mon and his sporting prowess encouraged employers to take him on. He started off working with the Civil Service in Cork before training to be a lawyer and moving to Dublin to work at the District Court, alongside playing for the Dublin Football Club who won their first Dublin Senior Football Club Championship in 1944 on his timely arrival. Lynch was called to the bar and left the Civil Service in 1945 before being approached to declare for Fianna Fail in the 1946 by-election in Cork. He declined as his friend ‘Pa’ McGrath was standing (McGrath features in this archive on a number of occasions) but it instigated an interest in politics for Lynch who would contest elections for the coming years and work successfully with McGrath in the Dáil.

Lynch would go on to serve as Taoiseach from 1966 to 1973 and 1977 to 1979. He was involved in the dismissal of four ministers during the Arms Trial of May 1970, including Charles Haughey, Neil Blaney, Kevin Boland and Michael Moran. (Gerry Jones, a witness in the trail, also features in our archive). Presciently he noted that one of the difficulties dealing with the British is that they are not very well acquainted with the issue of the North and he tried to address it with the British Prime Minister Edward Heath in 1971. Lynch loved sport and would credit it with teaching him how to be part of a team and how to cope with victory and defeat. We can see how the vagaries of his life fluctuated as with any match and his is a legacy that prevails in the history of Cork and beyond. (Jack Lynch, 'My Life and Times', Magill Magazine, 29.11.1979.)