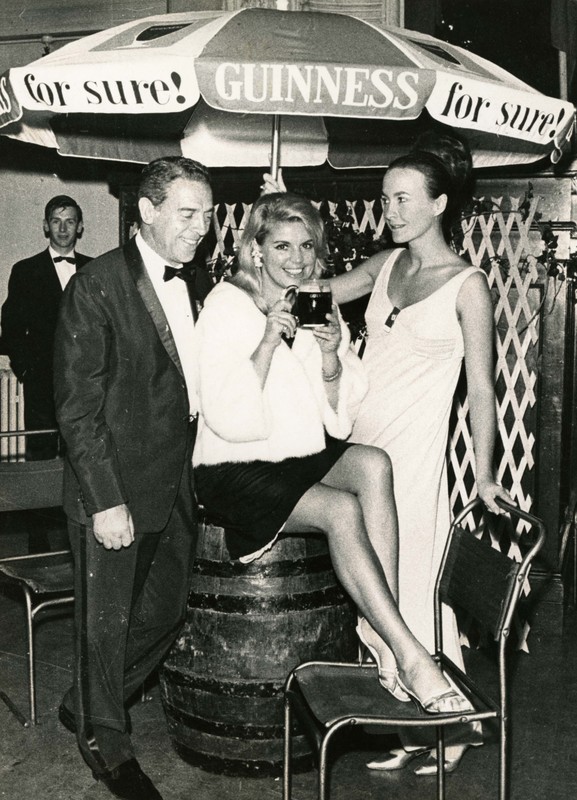 This is a black and white photo, taken at the Guinness festival club in 1968, of the English film actor Mollie Peters and the Irish model Grace O’Shaughnessy with a man identified as Eddie Byrne. Byrne is standing next to Peters who is sitting on a beer key, wearing a white fur jacket over a dark dress, and drinking a pint of Guinness. On her right O’Shaughnessy, in a long white dress, poses decorously holding onto the large promotional umbrella.

Grace O’Shaughnessy was a top Irish model in the 1960s based in Dublin. In 1966, when working in the Lebanon as a secretary, she was named as the ‘Ideal Woman of Europe’ in an Italian competition. She worked with the fashion designers Sybil Connolly, Ib Jorgensen and Nellie Mulcahy. She returned to Ireland and set up a modelling agency, as well as working as a fashion TV presenter for RTÉ during the 1970s and 1980s. She has been an ambassador for Women’s Aid, and for Third Age which is dedicated to the well-being of older people. Her companion in this picture is Mollie (sometimes known as Molly) Peters born in 1939. Peters was the stage name of Vivien Humphrey, who grew up in Suffolk, England. She started out as a model for men’s magazines but achieved cult cinema status for appearing as the sensuous Nurse Fearing, opposite Sean Connery's 007, in the first Thunderball (Terence Young, 1965).