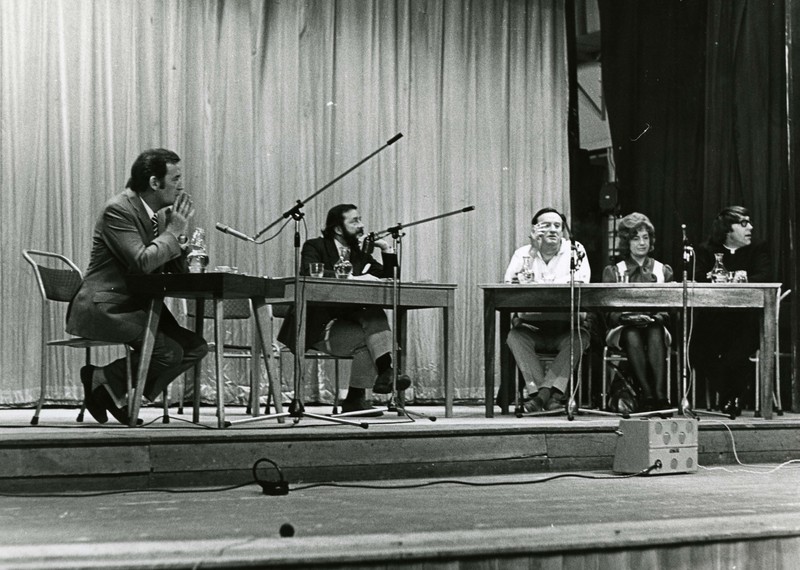 This is a black and white photo of a discussion panel that includes the Irish television presenter Bunny Carr, the screen writer Wolf Mankowitz, Joan Long and two others unidentified. The panel is part of a 1970 symposium for the Cork Film Festival. The five panellists are sitting in a semi-circle on the stage in front of long-armed microphones, and include an unidentified priest on the far right sitting next to Long. Jugs of water and ashtrays are placed on the wooden tables in front of them and they all appear to be listening attentively to a speaker off-camera.

Bunny Carr is sitting on the far left, hands folded at his chin, looking to his left across the stage. Born in Dublin, Bernard ‘Bunny’ Carr (1927-2018) was a popular RTÉ television presenter during the 1960s and 1970s. He also founded Carr Communications which is said to have trained six of Ireland’s Taoisigh (prime ministers). However it is as a television host of popular television shows that he is fondly remembered including, Teen Talk, The Politicians, Going Strong, and most famously the quizmaster of Quicksilver, where he was accompanied by the musical cues of organist Norman Metcalfe, which made its debut in 1965. (‘Bunny the man who stopped the lights – then showed politicians how to deal with life in spotlight’, Irish Times, 21.09.2018.)

Wolf Mankowitz (1924-1998), sitting on the right in this picture wearing a white shirt, with a cigarette in hand, was an award-winning English screenwriter and author known for his novels, plays and screenplays. He was of Jewish descent, born in the East End of London. However, following altercations with the English revenue, he moved to Ireland to avail of Charles Haughey’s generous tax policy towards artists and settled in Cork in 1971. Mankowitz was a successful screenwriter in the 1950s and wrote screenplays for his own works and adapted others including A Kid for Two Farthings (Carol Reed, 1953) and The Millionairess (Anthony Asquith, 1960) starring Sophia Loren and Peter Sellers. He was one of the screenwriters on the first James Bond film Dr No (Terence Young, 1962) but asked for his name to be removed from the credits as he thought it poor; he also collaborated on the Bond movie Casino Royale (Martin Campbell, 1976).

In 1972 Mankowitz wrote and directed The Hebrew Lesson, starring Milo O’Shea, Patrick Dawson and Harry Towb (who also appears in this archive). Set in Cork in 1921, during the War of Independence, it is about the friendship between an IRA man escaping pursuit from the Black and Tans, and an elderly man at a synagogue. He wrote the screenplay having being told the story about an IRA man hiding in a small synagogue in Dublin’s Lennox Street and it was shown at the Cork Film Festival in 1972. (TCD Irish Film and TV Research Online: tcd.ie/irishfilm.)

Interestingly the Guardian newspaper reported that the British M15 kept a security file on Mankowitz for more than a decade suspecting that he was a possible communist agent following his marriage to Ann Seligmann, in 1944, as she was a communist party member. The investigation was dropped when the M15 informant insisted that Mankowitz’s leftwing sympathies had disappeared noting that “He comes to the college every morning with a copy of the Times.” (Alan Travis, The Guardian, 26.08.2010.)