Jane Seymour with Carol Cleveland, Patrick Wayne and others at Lord Mayor Reception 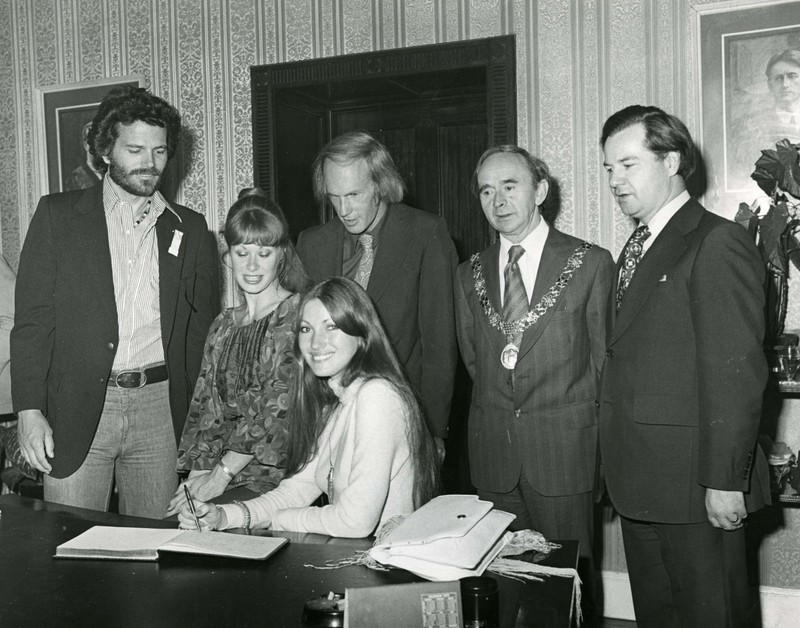 Jane Seymour with Carol Cleveland, Patrick Wayne and others at Lord Mayor Reception

This is a black and white photo of the actor Jane Seymour signing the visitors’ book in the Lord Mayor’s Office at the Cork City Hall. The Lord Mayor Pearse Wyse (1928-2009) stands on the right which dates this photo to his mayoralty 1974-1975. The reception includes the actor Patrick Wayne on the left and, perched on the arm of the chair, the Monty Python actor Carol Cleveland. The photo also identifies the TV director and author Christopher Fitz-Simon and Pat Roche from the Cork-Kerry Tourism Board. Fitz-Simon was a drama director with RTÉ who has held posts as artistic director of the Lyric, Abbey, and Peacock Theatres. In 2007 he published his well-received memoir of Ireland in the 1940s Eleven Houses (Penguin, Ireland). He stands behind Jane Seymour in this picture, looking down, as she looks up and smiles at the camera.

Born in 1951, Seymour has an extensive stage and screen career. She is probably best known for roles in the James Bond film Live and Let Die (Guy Hamilton, 1973), Somewhere in Time (Jeannot Szwarc, 1980) with Christopher Plummer and Christopher Reeve, and the miniseries East Of Eden (1981) winning her a Golden Globe. She has numerous television credits including The Onedin Line (1972) with Peter Gilmore (who also came to the Cork Film Festival), Onassis: The Richest Man in the World (1988), for which she won an Emmy Award, and the long-running show Dr Quinn, Medicine Woman (1993-1998). Seymour also worked alongside Patrick Wayne on the fantasy film Sinbad and the Eye of the Tiger (Sam Wanamaker, 1977).

A bearded Patrick Wayne, stands on the left of this photo. Born in 1939, he is the son of the actor John Wayne (1907-1979) and would act in eleven films alongside his father including the John Ford classics: The Quiet Man (1952), Mister Roberts (1955), The Long Gray Line (1955), and The Searchers (1956). Patrick Wayne was working on the fantasy film Sinbad and the Eye of the Tiger with Jane Seymour when he was asked to come to Cork to represent his father’s new movie Brannigan (Douglas Hickox, 1975) starring John Wayne, Richard Attenborough and Judy Geeson – all of whom came to the Cork Film Festival. (Pádraic Killeen, ‘Duke’s sons guest of honour at John Ford Ireland Symposium,’ Irish Examiner, 04.06.2013)