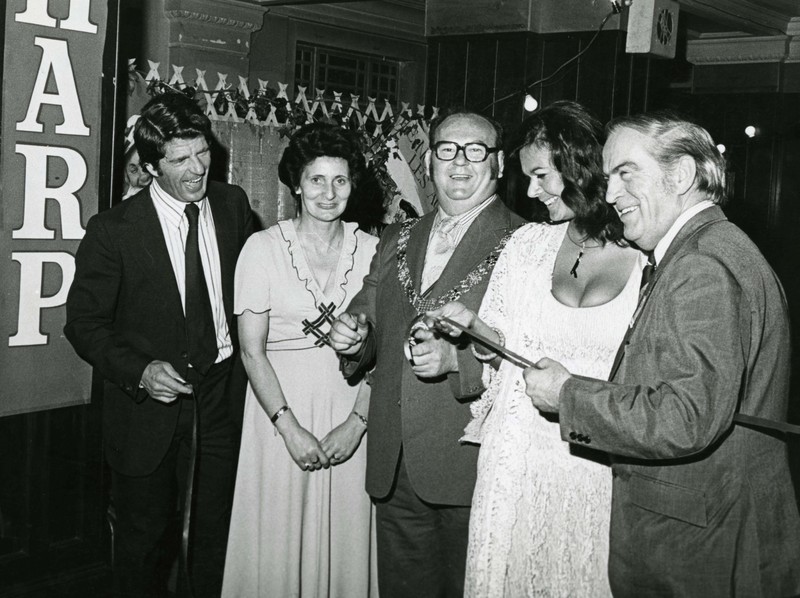 This is a black and white photo of the English actor Imogen Hassall with Lord Mayor Seán French, his wife Patricia French, festival director Dermot Breen and Keith Hunt – a representative from Guinness. They are standing at the ribbon of the Harp-sponsored festival club and are possibly about to open the Club. The Lord Mayor, wearing his chain of office, stands at the centre of the group flanked by his wife Patricia, in a frill-trimmed light-coloured dress, and the actor Imogen Hassall in a light-coloured lace gown.

Imogen Hassall had a brief prolific film and television career in the 1960s and early 1970s. Her filmography includes Carry on Loving (Gerald Thomas, 1970) with Sid James, Joan Sims and Kenneth Williams, El Condor (John Guillermin, 1970), and a handful of horror movies including the Hammer production When Dinosaurs Ruled the Earth (Val Guest, 1970), and Incense for the Damned (Robert Hartford-Davis,1972) with Patrick Macnee and Peter Cushing. By the time she came to Cork in 1977 her film career had petered out before her final film role in the James Bond spoof Licensed to Love and Kill (Lindsay Shonteff) in 1979.

Hassall had a turbulent personal life and died by suicide in 1980, age 38. Her visit to Cork in 1977 caused a kerfuffle with her hosts: when she declared she was bored she was apparently ‘sent home’ on an early flight and the press of the day had a field day with headlines such as the ‘Cork Hassall hassle.’ (Evening Press, 10.06.1977.)