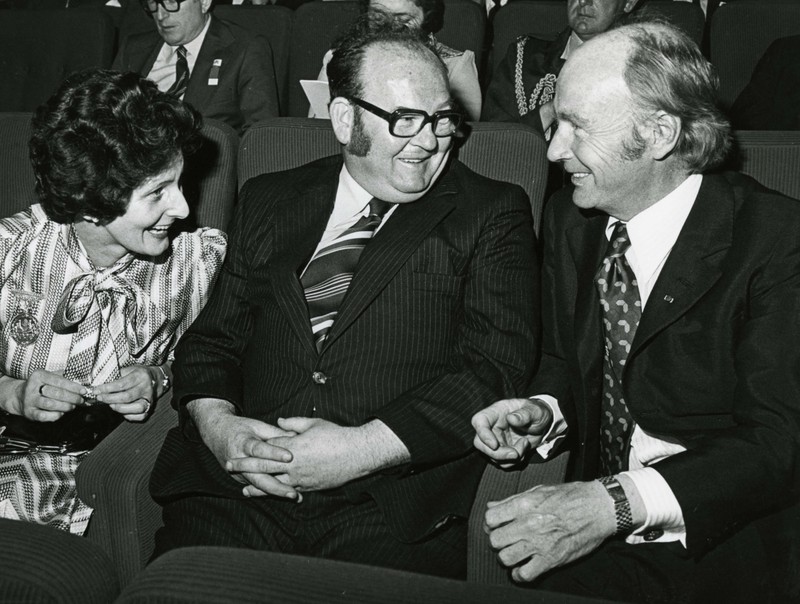 This is a black and white photo of President Hillery at a screening with the Lord Mayor of Cork, Seán French and his wife Patricia ‘Patsy’ French. The three of them sit in a row and appear to be enjoying a convivial conversation – Patricia French, in a striped dress tied at the neck with a bow, leans over her husband as she chats with President Hillery. She appears to be wearing the Gold Medallion which is worn by Lady Mayoresses; it is circular shaped with twist wire and a hand-engraved Celtic border. The centre portion is decorated with the Cork Arms and a spray of shamrock. The medallion was presented in 1961 by the Cork Jewellers’ Association to the Corporation.

Patrick Hillery (1923-2008), on the right of the photo, was a Fianna Fáil politician who served as the sixth President of Ireland from 1976 to 1990. This picture, taken in 1976, would have been taken a few months before he was made President of Ireland in December of that year. He is shown here sitting next to the Fianna Fáil politician, Seán French, who served as Lord Mayor of Cork during his early presidency, from 1976 to 1977.

Seán French represented Cork in Dáil Éireann for 15 years and was a trusted confidante of former Taoiseach Jack Lynch; he ran alongside him in the 1969 and 1973 general elections and would benefit from the large transfers from Lynch who had a huge surplus of votes. His father, also called Seán French, also served as both a Fianna Fáil TD and a Lord Mayor of Cork serving seven terms until his early death, age 47, in 1937. In addition to his political duties Seán French sat on the board of Glen Rovers and the Cork County Basketball Board, where he was treasurer.  At his funeral Fianna Fáil leader, Micheál Martin, noted that French had made an enormous contribution to public life in Cork. (Paul O’Brien, 'Late TD a committed, respected, talented person,' The Examiner, 29.12.2011; Barry Roche, 'Tributes paid as former Cork TD Seán French dies,' irishtimes.com, 29.12.2011.)