Screening at the English Market 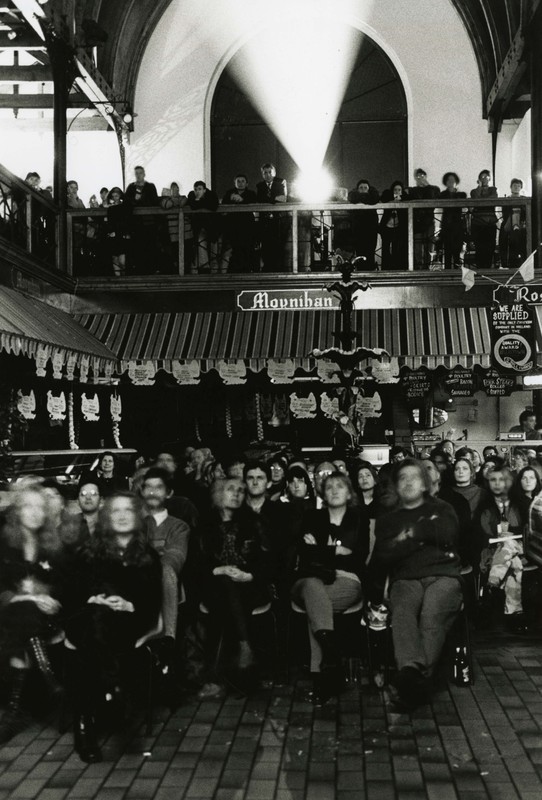 Screening at the English Market

This is a black and white undated photo of a film screening at the historic indoor English Market in Cork. The light of the projector can be seen on the crowded balcony that is home to the Farmgate Café. Downstairs, in the market foyer, the audience are seated around the cast-iron market fountain looking up at a screen out of shot. The distinct signage for the long-established Moynihan’s Poultry market stall can be seen in the background.

The English Market has often been transformed into a cultural hub and ad hoc cinema over the years, be it for the Cork Film Festival or the season finale premiere of The Young Offenders in 2018. The Farmgate has been the venue for a series of film festival ‘Grand Café Screenings’ of silent classics, sometimes with live musical accompaniment, and this image might be of one of those screenings.

The market dates back to King James 1 in 1610 but it began trading as a covered market in 1788. It was named the ‘English Market’ to reflect the protestant makeup of the corporation of the time – the name also distinguished it from a nearby ‘Irish Market,’ otherwise known as St. Peter’s Market, located on North Main Street at the junction of Cornmarket Street. The English Market once served the wealthier classes in Cork, while the less well-off shopped at the Irish Market. The Irish Market is long since gone and is now the Bodega Bar at Cornmarket Street, while the English Market continues to thrive. Its fortunes wax and wane in tandem with the history of the city – be it revolution, fire, recession, or coronavirus pandemic – however it continues to act as the heartbeat of the city and its importance is unquestionable. You can read more about it in the book Serving a City: The Story of Cork’s English Market by Cork-born historians Diarmuid Ó Drisceoil and Donal Ó Drisceoil (Collins Press, 2005).