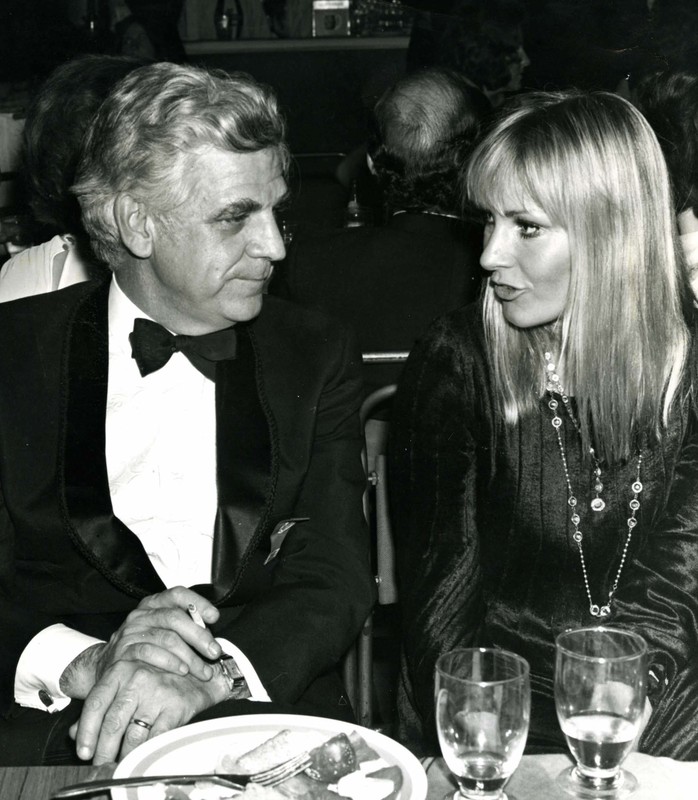 This is a black and white photo of the English actor and fashionista Virginia Wetherell with a guest identified at the back of the photo as the Canadian JJ McArdle. They are talking to each other, seated at a table laden with the detritus of a meal. McArdle, cigarette in hand, is turned towards Wetherell who is wearing a dark-coloured velvet dress.

Virginia Wetherell (1943-) worked in Hammer horror productions including Dr Jekyll and Sister Hyde (Roy Ward Baker, 1971) and Demons of the Mind (Peter Sykes, 1972), both of which were released around the time she came to visit the Cork Film Festival in 1972. She also appeared, as the naked actor tempting Malcolm McDowell as Alex, in Stanley Kubrick’s A Clockwork Orange in 1971. She met her future husband, the actor Ralph Bates, on the set of Dr Jekyll and Sister Hyde and was married to him from 1973 until his death from cancer in 1991.

In 1971 Wetherell opened a vintage clothes shop in London’s Notting Hill, known as Virginia. Virginia was an opulent boutique-style shop that attracted designers and models from all over the world, only shutting down in 2015 when Wetherell (now Bates) turned 72. (‘After a career dressing up, Virginia Bates began to share her individual style. It took the world 30 years to catch up,’ The Herald, 17.04.2004.)