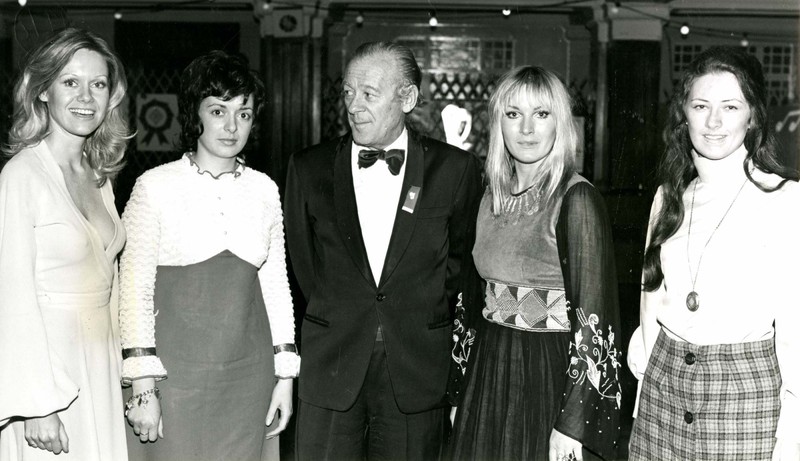 This is a black and white photo of the English screenwriter Michael Pertwee with the actors Suzanna Leigh, Virginia Wetherell and others who are unidentified. The five guests stand and pose for the camera as Pertwee turns towards Leigh standing at the far left of the photo.

Suzanna Leigh is best known for her television and film roles, in particular her work with the film director Hall Wallis who directed her in Boeing, Boeing (John Rich, 1965) with Tony Curtis, and Paradise, Hawaiian Style (Michael D Moore, 1966) opposite Elvis Presley. She worked in several Hammer horror films, including The Deadly Bees (Freddie Francis, 1967) and Son of Dracula (Freddie Francis,1974) starring Ringo Starr. Her fellow actor in this picture, Virginia Wetherell, also worked in Hammer horror productions including Dr Jekyll and Sister Hyde (Roy Ward Baker, 1971) and Demons of the Mind (Peter Sykes, 1972), both of which were released around the time of this picture when she came to visit the festival in 1972.