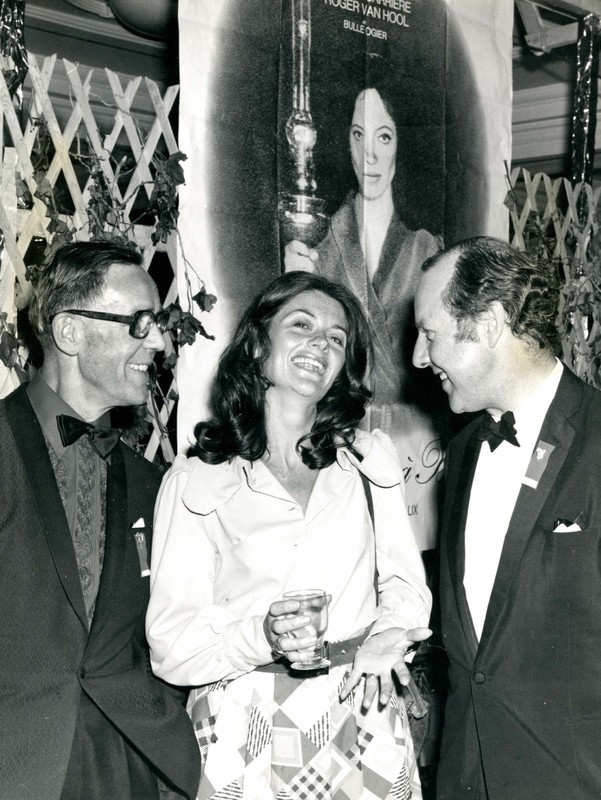 This is a black and white photo of film critic John Stapleton and actor Harry Towb with the harpist Deirdre O’Callaghan. The convivial group are at the festival club, standing in front of a poster advertising the French-Belgian film Rendezvous at Bray (André Delvaux, 1971).

Deirdre O’Callaghan is an international harpist and singer; she was married to the Irish athlete Noel Carroll from 1964 until his untimely death in 1998. Carroll was a middle-distance runner who competed for Ireland in the 1964 Toyko Olympics and the 1968 games in Mexico. He was one of the founders of the Dublin Marathon and the winner of the marathon now receives the Noel Carroll Memorial Trophy in his name.

While the photo is marked 1968, the Rendezvous at Bray poster allows us to provisionally date the photo after the release of this film. Rendezvous at Bray starred the Danish-French actor Anna Karina (1940-2019) who acted in several films made by her ex-husband Jean-Luc Goddard, including A Woman Is a Woman (1961), My Life to Live (1962), and Band of Outsiders (1964) (with the iconic line-dance scene in the Parisian café with Sami Frey and Claude Brasseur!). Karina also starred in Rainer Werner Fassbinder’s Chinese Roulette (1976) which he supposedly wrote for her. The archive has some film stills from Fassbinder’s Querelle (1982) with the actor Brad Davis and Günther Kaufmann – the sometimes lover of Fassbinder.