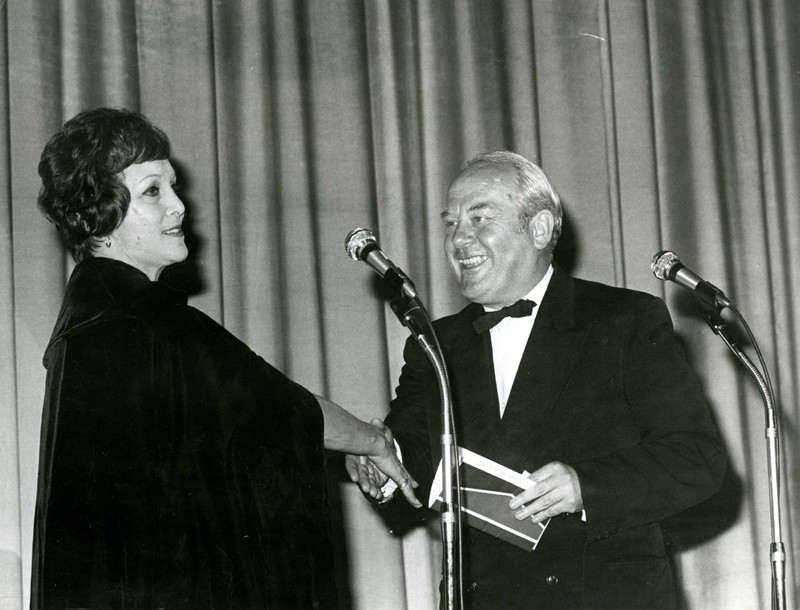 This is a black and white photo of Dan Donovan and the English actor Maxine Audley. Donovan, holding a festival brochure dated 1972, is smiling broadly as he reaches out to shake Audley’s hand.

Donovan (1926-2008) was a founding member of Cork’s Everyman Theatre and Cork’s cultural legacy owes much to his passion and love of the arts. He was a board director of the Cork Choral Festival as well as the Cork Film Festival. Donovan was also an actor and a beloved teacher at the Presentation Brothers College in Cork, where he taught for almost 40 years, and whose theatre is named after him. In 2008 the Everyman, in association with Collins Press, published Dan Donovan: An Everyman’s Life to mark his 80th birthday. He died, age 92, in 2008.

At the time of this picture, in 1972, Maxine Audley (1923-1992) had just completed her final film role in Running Scared (David Hemmings, 1972). Running Scared was directed and co-written by David Hemmings who also came to the Cork Film Festival during the seventies. Audley was an English stage and film actor who consistently worked in theatre to high acclaim. She toured with the Old Vic and worked in the West End and Stratford with John Gielgud, Kenneth Tynan, and Peter Brook. Audley also worked in television, radio and over 20 films, including Charlie Chaplin’s satirical comedy A King in New York (1957), which also starred the English actor Dawn Addams who came to the Cork festival in its early days.