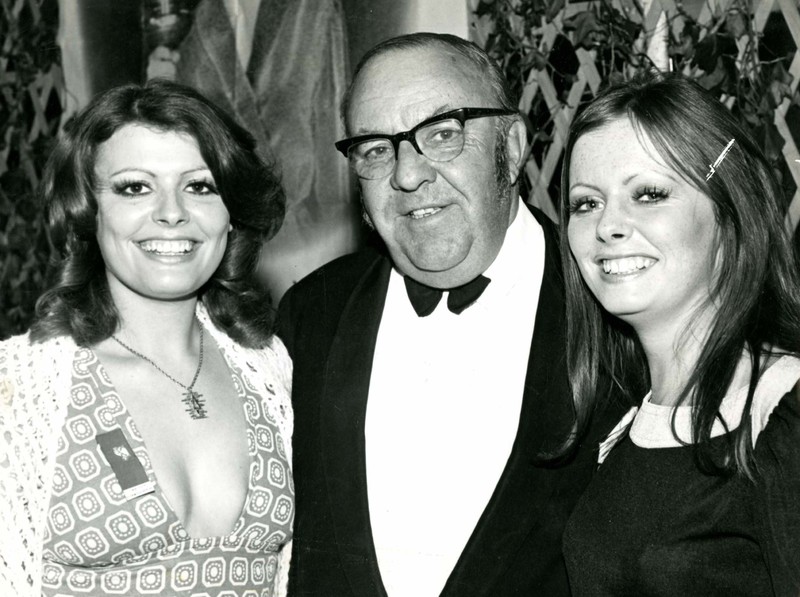 This is a black and white photo of sisters Ann and Vicki Michelle posing with Westropp Irvine from the Player and Wills tobacco company in Ireland. Player and Wills were friends of the film festival and supported it on occasion with a development grant. While this picture appears to be taken at the festival club we know that Player and Wills sometimes held a reception for the festival at their factory headquarters on Dublin’s South Circular Road. The factory was constructed in 1935 for Player and Wills tobacco until its closure in 2005 when the company moved out of Ireland. The Player Wills site is regarded as one of the last remaining quality development sites in the city centre and, as of May 2020, is being considered for redevelopment into c. 400 new homes.

Both Vicki and Ann Michelle are English actors. Vicki Michelle (1950-), on the right in this photo, is best known for her work in the BBC television series ‘Allo ‘Allo. She has an extensive television and stage career appearing on Celebrity Masterchef (2008), Emmerdale (2007-2009), I’m a Celebrity … Get Me Out of Here! (2014). She has also appeared on the Irish sketch show The Mario Rosenstock Show (2012). Michelle played alongside her sister, Ann Michelle (1952-), in The Virgin Witch (Ray Austin, 1971) which was rejected by the British Board of Film Censors before being passed with an X-rating. The cut version was released in 1972 around the time of this photograph. Ann Michelle also had a small role in the British horror-cult film Psychomania (aka The Death Wheelers) (Don Sharp, 1973) starring the Academy Award-winning George Sanders and Beryl Reid. Sanders (1906-1972) died by suicide soon after completing Psychomania.