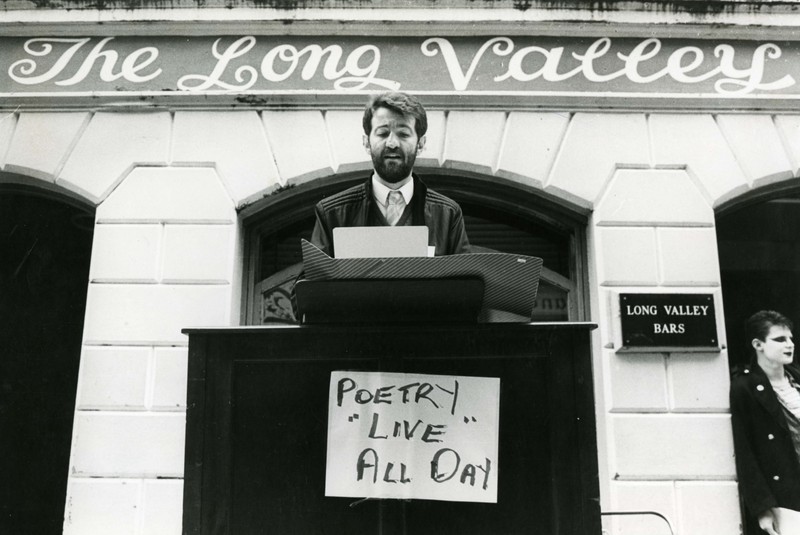 This is a black and white photo of Mick Hannigan, reading from a makeshift podium in front of the etched windows of the Long Valley Bar, on Winthrop Street in Cork. To the right, leaning against the wall of the arched lobby, we note the distinctive profile of an androgynous glam-rock devotee, dressed in a brass-buttoned jacket, typical of the early 1970s when this picture was taken. The Long Valley hosts a weekly poetry event called Ó Bhéal (word of mouth) in its Hayloft Bar. So the presence of the former film festival director Mick Hannigan reading poetry from the rostrum, decorated with a poster marked Poetry “Live” All Day, might not seem incongruous to Corkonians familiar with the bohemian bent of the Long Valley.

Also known as Moynihan’s Long Valley Bar, the Long Valley opened its doors in 1842. It was run for many years by Mr (Humphrey) Moynihan and Mrs (Rita) Moynihan (you daren’t call them anything else) before being taken over by their son Peader Moynihan who runs it in the same fashion as his parents, and his grandfather John Moynihan before them. It is one of the few bars in Cork that retains a snug, just inside the doors on the left, where the etched windows throw light onto the large table that was once the property of the American Embassy in Dublin. Further into the main bar, the hand-crafted tables include a singular large circular table that you’d be lucky to bag on a busy December day. In his article on the Long Valley, Dan Hickey tells us that it came from the Celtic, a White Star Line ship that ran aground off Roche’s Point near Cork Harbour in December 1928. Many patrons have sat around these historic tables with a Long Valley pint and an iconic doorstep sandwich. And, as the poet and former film festival organiser, Theo Dorgan notes: “It would take a strong man in the full of his health, with the help of three small children, to munch through their mouth-watering sandwiches.”

A sculpted bust of the troubled Irish composer, Frederick May (1911-1985), by the Cork-born sculptor Séamus Murphy, sits amongst the artworks on display in the Long Valley, and we note its presence because Murphy designed the St Finbarr statuette which was handed out to award winners in the early decades of the film festival. (Dan Buckley, ‘The Long Valley: A pub with a history as long as its bar counter’, Irish Examiner, 26.12.2017.)