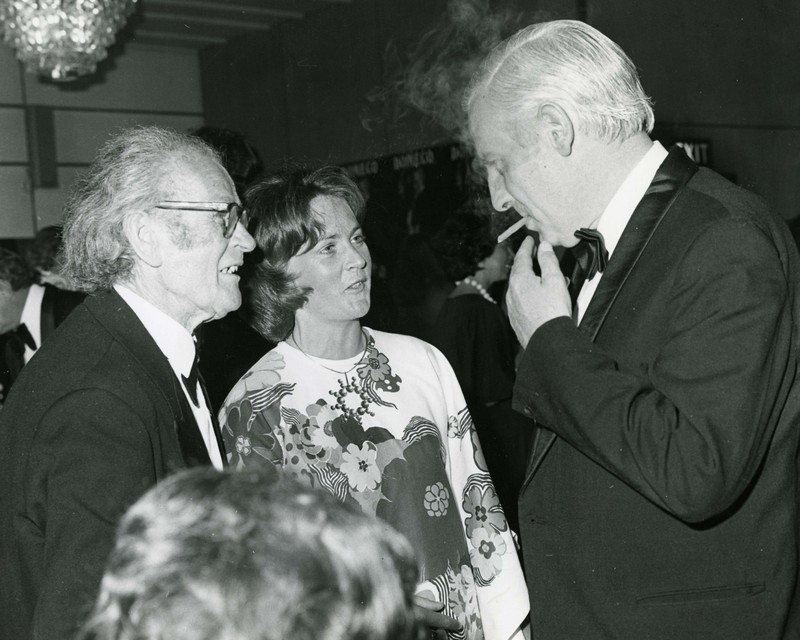 This is a black and white photo of the sculptor Séamus Murphy and his daughter, Bebhinn Marten, in conversation with the Cork politician Peter Barry. The convivial group is dressed formally, and Marten, wearing a flower-decorated light-coloured dress, is looking up to Barry who is smoking. A whorl of smoke rises up through the air, crowning Barry, who is turned towards Marten as he listens to her. The picture is provisionally dated ‘1970s’ and would have been taken a few years before Murphy’s death in 1975.

We have a particular affection for Seamus Murphy in the archive as he designed the St Finbarr statuette which was handed out as a film festival award for many years. Murphy was an Irish sculptor and stone carver with a studio based at Watercourse Road, in Blackpool, Cork. He was inspired by the writer Daniel Corkery, a teacher at his school, to attend the Cork Crawford School of Art. After receiving a scholarship he later went to Paris to study under the Irish-American sculptor Andrew O’Connor before returning to Cork and opening up his studio. Murphy was commissioned to design the Church of the Annunciation, in Blackpool, Cork, as well a number of unique carvings of statues, gravestones, and monuments around the City and beyond. Many examples of his work can be seen in the cemetery of St Finn Barre’s Cathedral especially in ‘Musicians’ Corner.’ A favourite City monument is his limestone drinking trough for dogs – tucked away at the top of Patrick’s Street under a now empty shopfront at number 121. It is marked Madraí – the Irish word for dogs. A short documentary about Seamus Murphy, The Silent Art (1958) by Louis Marcus, premiered at the festival in 1959.

Murphy was married to Maigread, who was a founder of the Cork Arts Society and the Cork Film Society. She was a gifted artist in her own right and designed the well-known Paddy Irish Whisky logo. They met at the Cork Crawford School of Art and went on to have three children, the novelist Orla Murphy, the musician Colm Murphy, and the designer Bebhinn Marten who we see in this picture talking to Peter Barry.

Bebhinn Marten is a knitwear designer based in Baltimore, Cork. Her company, Beacon Designs, developed during the 1970s, was one of the few knitwear companies designing and manufacturing in Ireland. However, due to the decline in the Irish woolen industry, the knitwear factory shut down and she converted the factory into a home. (Kieran McCarthy, Secret Cork, Amberley Press, 2017; Mary Leland, 'Making a new home from an old factory by the sea in West Cork', The Irish Times, 17.02.2018.)