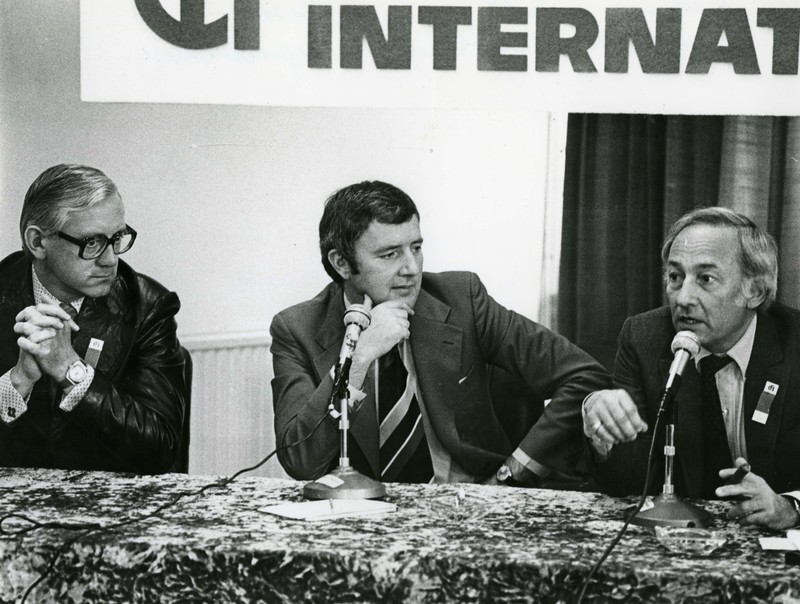 This is a black and white photo of a press briefing with Sheamus Smith, Bill O’Herlihy and Disney representative whom we have provisionally identified as Roy Disney. Smith and O’Herlihy are turned towards Disney listening to him as he speaks. Behind them we notice part of a sign advertising the Cork International Film Festival.

Sheamus Smith, on the left in a leather jacket, started his career as a photojournalist for the now defunct Dublin paper Evening Press before moving to Canada to study film and television. He returned to Ireland in 1961 to join the newly formed Teilifís Éireann (RTÉ) starting as a cameraman before becoming a producer and director with the station in 1963. Later he was appointed managing director of Ardmore Film Studios in 1975 and was instrumental in setting up the Irish Film Board. Most notably he was appointed Irish film censor and would go on to become Ireland's longest-serving film censor in the history of the State (1986-2002).

Sitting in the middle is the Cork-born RTÉ television broadcaster and Irish Film Board Chairman Bill O’Herlihy (1938-2015). He grew up in Glasheen in Cork and attended Glasheen Boys' national school, and St Finbarr’s College in Farranferris, leaving school at fifteen to join the Cork Examiner before working for RTÉ. He would become a household name best known for his sports coverage, along with co-presenters Eamon Dunphy and John Giles, on programmes such as Sunday Sport and Sports Stadium and in his time presented 10 FIFA World Cups and 10 Summer Olympic Games. O’Herlihy was a keen cinephile and brought this to his work at the film board. O’Herlihy promoted the film industry and in particular was keen to develop filming in rural Ireland; he worked for some time as PR for the Cork Film Festival where he emphasised the focus on Irish film. (Niamh Horan, Irish Independent, 28.04.2013.)

Roy Disney, on the far right, cigar in hand, was the nephew of the late Walt Disney and a senior executive of the Walt Disney Company. Born in 1930 in California, he worked all his life for Walt Disney Productions and made a significant impact on its direction, striving to keep it from being split up by fellow Disney executives. Disney became an adopted native of Cork when he purchased Coolmain Castle near Killbrittan, Cork in the early 1990s and, being a keen sailor, was a regular visitor to Cork race week before his death in 2009.