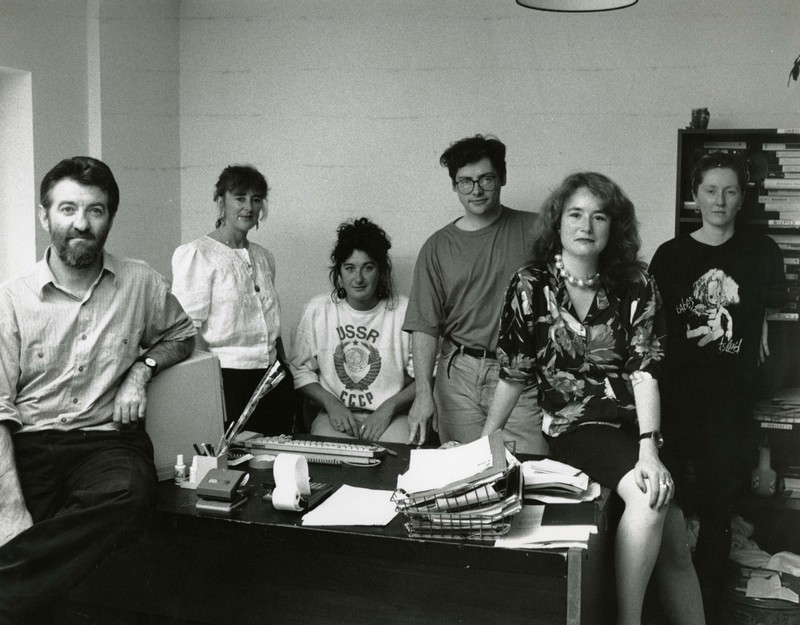 This is a black and white photo of festival director Mick Hannigan with his colleagues. The photo is undated but we might suggest that it was taken during the late 1980s/1990s when Hannigan ran the festival, after taking it over from Robin O’Sullivan in 1986. After his departure in 2013, he set up IndieCork Film Festival with Úna Feely who was a programmer for the Cork Film Festival from 2001 until her departure in 2013. IndieCork champions short films, documentaries and independent features. Hannigan and Feely also run the independent film company Green Ray Film Agency which provides a broad range of services to filmmakers, festivals and event organisers.

The photo shows Hannigan sitting on the edge of the office desk, leaning on the monitor of the IBM-type PC. His colleagues sit and stand around the desk posing for the camera. We recognise the artist Kieran O’Connor standing at the back in glasses. O’Connor is an artist and graphic designer based in Cork. A graduate of University College Cork, O’Connor worked for the festival under the stewardship of Hannigan, and his contribution to the festival can be recognised in the artwork of festival posters, programmes and logos. His art reflects a sense of place, and we can see this in his work on posters and programme covers in the archive, in particular how he often entwined the imagery of film and festival with that of Cork itself. O’Connor is a founding member of the Cork Film Centre which is a resource centre for aspiring young filmmakers in the Cork area. The centre also facilitates the successful First Cut! Youth Film Festival - a youth-centred festival dedicated to showing films made by young filmmakers.

In front of O’Connor, perched on the edge of the desk, we note the then press officer, Ruth Riddick, in a floral shirt. Riddick was press officer for the festival from 1990 to 1995 before serving on the Board of Directors in 1996. Riddick also worked for the Dublin Film Festival in the early nineties, and as a campaigner and activist until her move to America where she is now based. In America, Riddick works as an educator and counsellor through her education company Sobriety Together. She is a prolific writer and her work has been published in the Field Day Anthology of Irish Writing (2000), among other publications including Ireland’s Great Hunger Museum (Riddick et al, Quinnipiac University, 2002).