Chinese actor Tsai Chin and others 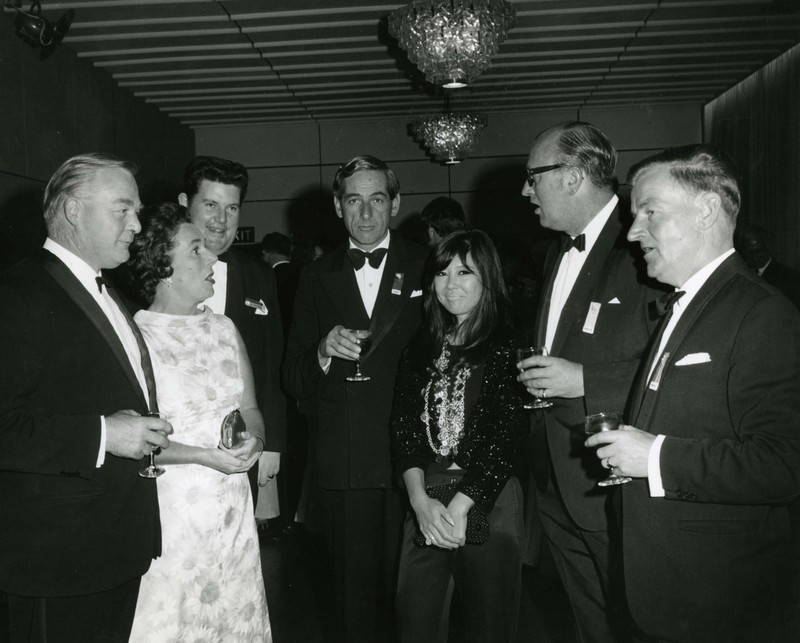 Chinese actor Tsai Chin and others

This is a black and white photo of the Chinese actor, director, and author Tsai Chin with a group of delegates identified at the back of the photo as Alan Buttonshaw, Vida Breen, Robin O'Sullivan, Frank O'Reilly, and Kevin Breen. The formally dressed group, some with a glass in their hand, are chatting and oblivious to the camera while Tsai Chin, wearing an elaborately beaded jacket accessorised with an ornate necklace, faces the camera smiling.

This is a unique film festival image, dated 1970s, of Tsai Chin. Chin is a Chinese actor born in 1933 and working to this day (2020). The daughter of Zhou Xinfang, a renowned master of the Peking Opera, she was the first Chinese student to study in London at the Royal Academy of Dramatic Art (RADA), the first Chinese actor to star in a West End show, and shored up the exotic quotient in movies such as Bond’s You Only Live Twice (Lewis Gilbert, 1967) and the Fu Manchu film franchise. In the 1960s she shot to fame when starring as 'Suzie,' the Hong Kong prostitute, in the 1959 West End play The World of Suzie Wong based on the book by Richard Mason; she would follow this with extensive work on stage, television, and screen including The Face of Fu Manchu (Don Sharp, 1965), The Virgin Soldiers (Leslie Thomas, 1966), The Joy Luck Club (Wayne Wang, 1993), Casino Royale (Martin Campbell, 2006) and most recently the voice of ‘Nai Nai’ in the computer-animated adventure Abominable (Jill Culton, 2019). Wishing to break away from being typecast as an exotic ingénue she later took roles that challenged the stereotypes of Asian women on the screen.

In 1988 Tsai Chin published her autobiography, Daughter of Shanghai, which recalls her early, and sometimes tragic, life including her early life in Shanghai, and her parents’ brutal deaths during the cultural revolution. It was a worldwide success and inspired the film of the same name, starring Tsai Chin, and directed by Michelle Chen Miao in 2019. (Jill Tweedie, 'From Suzi Wong sex-kitten to theatre pro', The Guardian, 17.09.2013.)