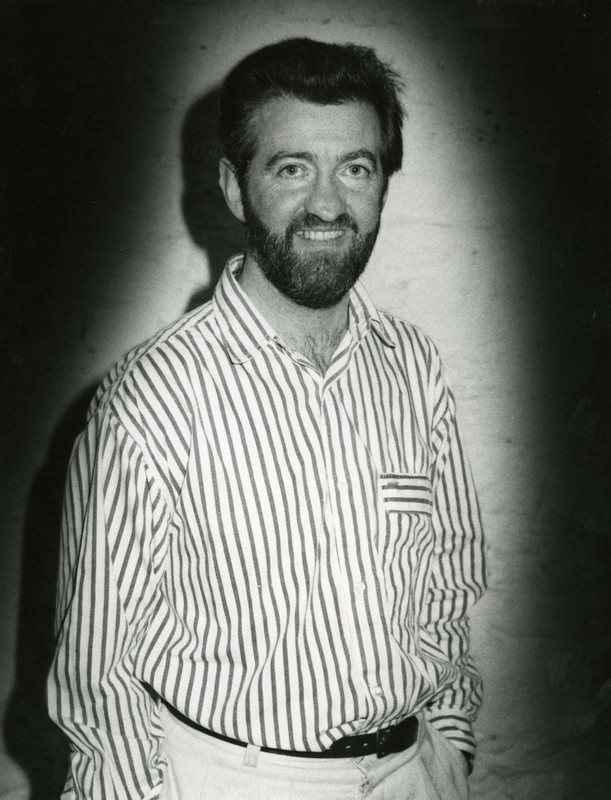 This is a publicity picture of Mick Hannigan who was the director of the Cork Film Festival from 1986 and its CEO from 2009 to 2013. The photo is undated, but we might suggest that it is from the 1980s when Hannigan, along with the poet Theo Dorgan, took the helm of the festival from Robin O’Sullivan who had managed it magnanimously after the unexpected death of festival founder Dermot Breen in 1978.

Hannigan and Dorgan were a formidable team and consolidated the work of the festival bringing short and independent films to big venues such as the Cork Opera House. In 1996 Hannigan opened the first art house cinema in Cork – The Kino – located on Washington Street, at the top of the Western Road. Its first film was the low-key British film Brassed Off (Mark Herman, 1996) but it was Shine (Scott Hick, 1996) that sustained an eleven-week run ensuring the early success of the Kino. It ran both popular and art-house films and, in conjunction with the Cork Film Festival, brought retrospective and cultural films to Cork. However, plagued by financial concerns, the Kino closed its doors in 2009 and the building, once a cultural hub for the city, is now destined for redevelopment.