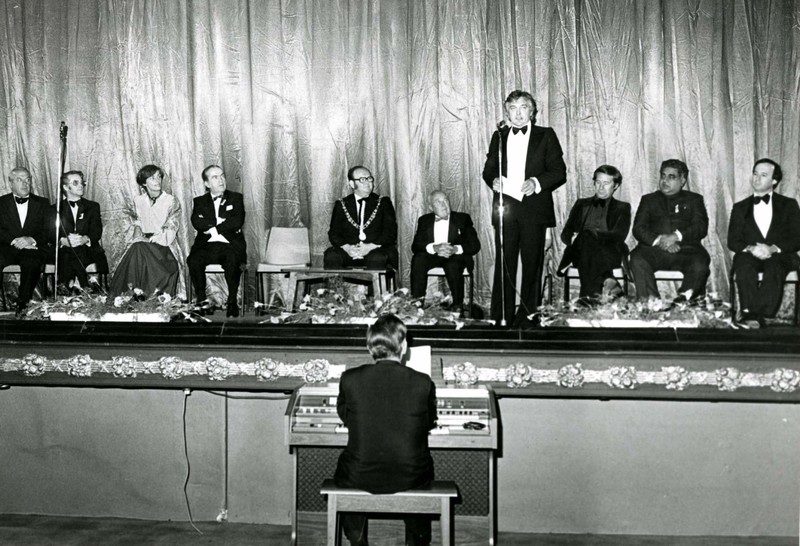 This is a black and white photo, dated 1976, of the actor David Hemmings speaking at an award presentation which was organised by George McSweeney (who might be sitting at the piano). The Lord Mayor Seán French, wearing his chain of office, is seated behind Hemmings next to the former Lord Mayor Gus Healy. Some of the other nine delegates are provisionally identified at the back of the photo as the Everyman Theatre founder, and Presentation Brothers College (PBC) teacher, Dan Donovan, Teddy O’Brien, festival director Dermot Breen, and Dorinda Coomber.

David Hemmings was an English actor, director, and producer who achieved international fame as a sixties icon following his memorable role, as a London fashion photographer (which might have been based on David Bailey), in Blow-Up (1966), by the Italian director Michelangelo Antonioni, starring Vanessa Redgrave and Sarah Miles. He later played the leading man, opposite Jane Fonda, in Roger Vadim’s fantasy Barbarella (1970). His filmography includes The Charge of the Light Brigade (Tony Richardson, 1968), Alfred the Great (Clive Donner, 1969) (which was filmed in Ireland), Juggernaut (Richard Lester, 1974), with Richard Harris and Omar Sharif, and the gangster movie The Squeeze (Michael Apted, 1977) with Stacy Keach and Edward Fox. Distracted by television roles and running his company, Hemdale Corporation, during the 1980s, his credits include Magnum PI, Airwolf, The A-Team, and Quantum Leap. By the 2000s his return to film was well-received and included the role of ‘Cassius’ in Gladiator (Ridley Scott, 2000), and the role of ‘Lenny’ in the poignant Last Orders (2001), alongside Tom Courtenay and Michael Caine, which was shown at the 46th edition of the Cork Film Festival in 2001. His role in The League of Extraordinary Gentleman (2003), with Sean Connery, was one his final roles before his unexpected death in Romania in 2003, age 62, whilst filming the British-Romanian horror film Blessed (a.k.a.Samantha’s Child) (Simon Fellows, 2004) with Heather Graham and James Purefoy. We also note that he had a minor role in the film St Joan (1957), based on the George Bernard play, directed by Austrain-born director Otto Preminger, who came to the film festival with Jean Seberg in the late 1950s.