Robert Shaw and Vida Breen at the Capitol Cinema 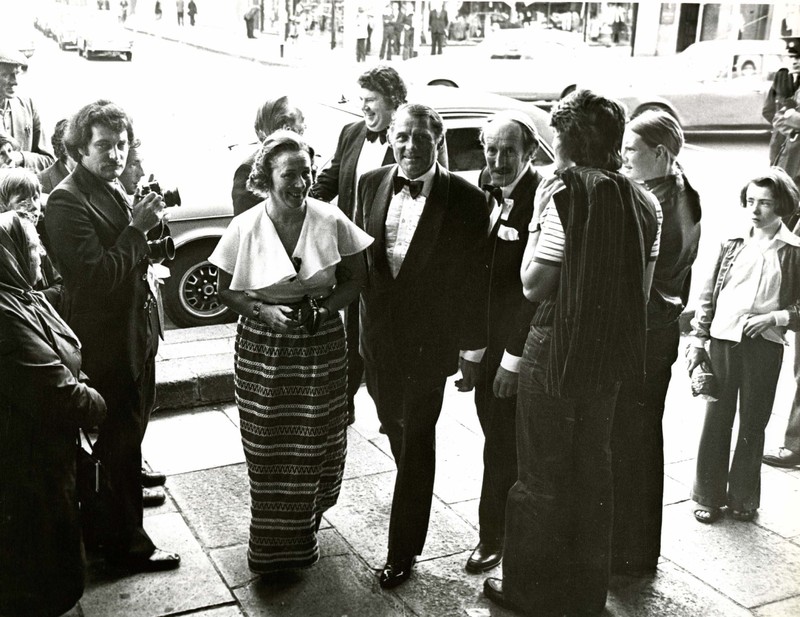 Robert Shaw and Vida Breen at the Capitol Cinema

This is a black and white photo of the actor Robert Shaw and Vida Breen at the entrance of the Capitol Cinema in Cork. Robert Shaw, in a dress suit, looks up towards the camera smiling, his hand linked through Vida Breen’s arm. She is dressed in a flouncy white top over a long chevron-patterned skirt, and smiles as she steps forward towards the cinema. Behind her, we can just make out her husband, the festival director Dermot Breen with Robin O’Sullivan. A small crowd gathers around them accompanied by a photographer and a guard. Beyond them the traffic turns down towards Washington Street onto the Western Road.

The Capitol Cinema was located at the junction of the Grand Parade and Washington Street. It opened in 1947 with the Bob Hope and Joan Caulfield comedy Monsieur Beaucaire (George Marshall, 1946). The cinema originally held over 1,300 patrons and at the time had one of the best operating systems in the country including a new magnetic sound system pioneered by 20th Century Fox. The sound from the speakers was so realistic that children ran out of the cinema crying when thunder broke out in the first showing of a film. It originally held a restaurant which was converted into a second screen in 1974, with seats for 105 patrons. Before long in 1989 it was converted into the city’s first multiplex with six screens. The new Capitol Cineplex was a popular cinema bringing movie blockbusters to the people of Cork until its closure in 2005 and conversion into a shopping and office block in 2017. The last film shown at the Cineplex was Harry Potter and the Goblet of Fire (Mike Newell, 2005) and The Constant Gardener (Fernando Meirelles, 2005). (John McSweeney, The Golden Age of Cork Cinemas, Rose Arch Publications, 2013.)

Robert Shaw (1927-1978) was an English actor, novelist and playwright. In 1961 he won the Hawthornden Prize, a British literary award established by the English philanthropist, Alice Warrender, for his second novel, The Sun Doctor. He had a successful television and stage career with productions on Stratford and Broadway including Harold Pinter’s The Caretaker (1961) with Donald Pleasance and Alan Bates which was reprised in the 1963 film The Caretaker directed by Clive Donner. His long list of films includes A Man for all Seasons (Fred Zinnemann, 1966) for which he was Oscar-nominated for his role as Henry VIII. Following this he went on to have a successful film career including The Sting (George Roy Hill, 1973) and Jaws (Steven Spielberg, 1975) with Roy Scheider.

Robert Shaw had ten children. His son, the actor Ian Shaw, was to portray his father in a West End play, The Shark is Broken (2020), about the beleaguered Jaws shoot directed by Guy Masterson. His grandchild, Ferdia Shaw, starred as the lead role in the Disney adaptation of Eoin Colfer's Artemis Fowl (2020), directed by Kenneth Branagh and starring Judie Dench and Colin Farrell.

At the time of this picture, dated 1976, Shaw had just starred in the British-American romance and adventure film Robin and Marian (Richard Lester, 1976) alongside Sean Connery and Audrey Hepburn. The director of Robin and Marian, Richard Lester, was also a visitor to the Cork Film Festival in the seventies. Shaw had a home in Tourmakeady, County Mayo, and died close by his home from a heart attack in 1978, just two years after this picture was taken, age 51.