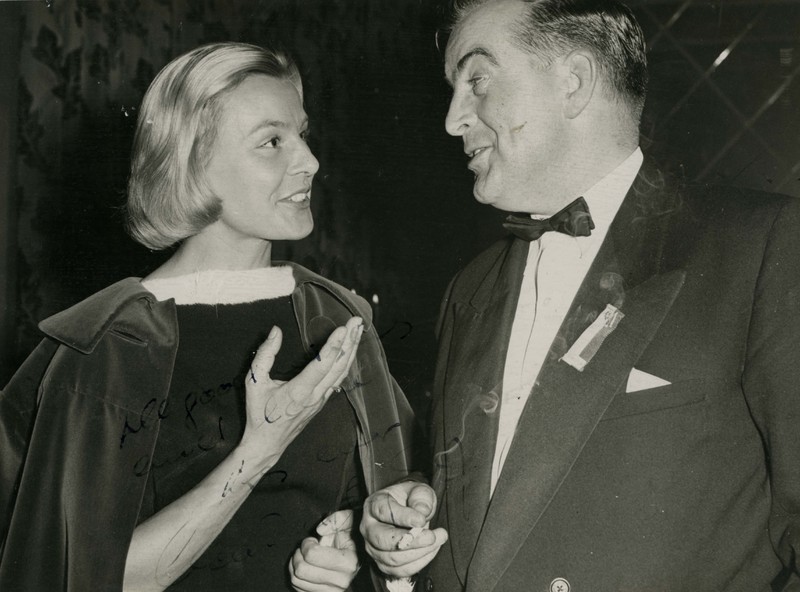 This is a black and white photo of the German film actress Eva-Ingeborg Scholz and the film festival director Dermot Breen. Scholz, wearing a velvet cape over a dark dress trimmed with white fur, is shown in profile smiling up at Breen as they chat. Whorls of smoke from Breen's cigarette float past the festival ribbon pinned to his lapel.

The photo is undated but we can place it c.1958 when Scholz came to the Cork Film Festival. Around this time Scholz had just completed The Girl from the Marsh Croft (Das Mädchen vom Moohof) (Gustav Ucicky, 1958) starring Claus Holm. We note that Scholz made her debut as 'Corona' in the successful 1948 black-and-white film 1-2-3 Corona (Hans Müller), set in a 1940s Berlin circus. The author Pter Pleyer regarded it as a classic ‘rubble film’ trying to provide some optimism when bleakness prevails. (German films made after World War II were often called ‘rubble films’ or Trümmerfilm; these films utilised the ‘rubble’ of bombed-down cities to reflect the harsh reality facing inhabitants during those years.) (Pleyer, Deutscher Nachkriegsfilm 1946-1948, p.120.)

The photo appears to be signed in dark ink across the lower half of the picture.