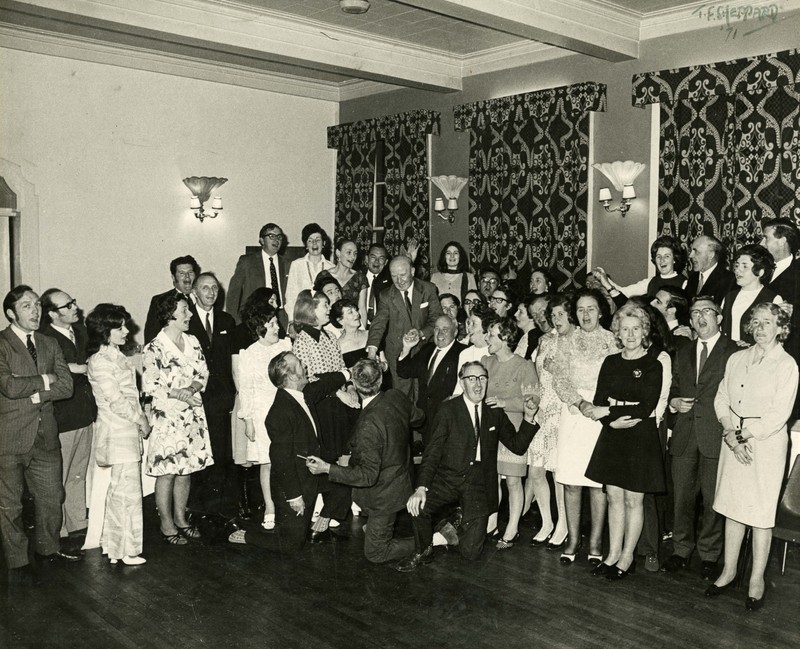 This is a black and white photo of Denis (Dinny) Gould's retirement party in June 1971. The photo notes that the party was a ‘Farewell to Captain Denis Gould’ who was secretary of the film festival since its inception in 1956. The convivial crowd are gathered around Gould who is standing at the centre, wearing a light-coloured jacket, his right hand outstretched towards festival director Dermot Breen, who is kneeling, cigarette in hand, looking up at Gould. With his left hand Gould clasps the hand of the politician, and former Lord Mayor of Cork, Gus Healy. We also recognise Robin O’Sullivan standing at the back on the left, under the fanlight wall sconce. O’Sullivan stepped in to run the film festival after the unexpected death of Breen in 1978, and ran it until Mick Hannigan and Theo Dorgan took over in the early eighties.

The large group, of approximately forty men and women, appear to be singing, and some of the women in the front row hold hands, with arms across their bodies, as if singing the Scottish tune Auld Lang Syne to bid farewell to their friend and colleague.