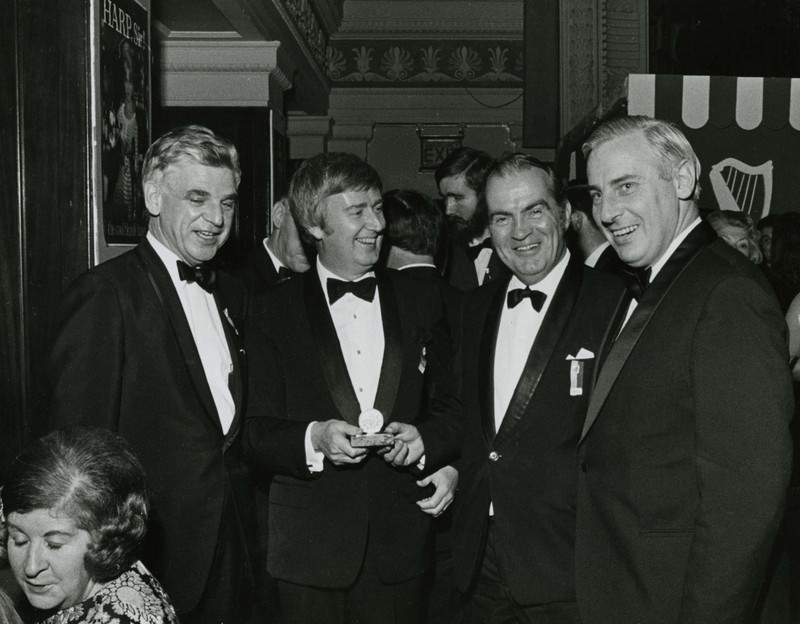 This is a black and white photo of a Canadian delegation to the Cork festival dated 1970. The photo was formerly framed and marked with details of the small group on its front and includes, from left to right, the Canadian Ambassador, James Joachim McCardle, the Canadian film director and producer Roger Blais, festival director Dermot Breen and Lord Mayor Peter Barry. The formally dressed group are smiling for the camera and Blais and Breen appear to be exchanging a small memento. Behind them the crowded room is decorated with the harp lager logo and poster (‘Harp Sir!’) and, at the lower-left corner of the photo, a lady is inadvertently caught in the image looking down.

Ireland has exchanged Ambassadors with Canada since 1949 when Ireland left the Commonwealth, and McCardle was the Canadian Ambassador to Ireland from 1968 to 1972. McCardle was no doubt at the festival accompanying the Canadian filmmaker Roger Blais (1917-2012) whose films include Royal Journey (David Bairstow, Gudrun Parker, Roger Blais, 1951) and Grierson (aka Monsieur John Grierson) (Roger Blais, 1972) both of which won the Canadian Film Award for Best Feature-Length Documentary. Grierson was a documentary film of the noted Scottish film and documentary maker John Grierson who founded the National Film Board of Canada (NFBC). Blais had a close relationship with Grierson who recruited him to the NFBC in 1945. Grierson was jury president of the Cork Film Festival in 1958 and an image of him, sitting with the Iranian-German film producer Vasgen Badal, Dermot Breen, and Donal Crosbie, can be viewed in the archive.

Peter Barry (1928-2016), on the far right next to Dermot Breen, was a Cork-born Fine Gael politician who served as Lord Mayor of Cork from 1970 to 1971. He would go on to serve at eight successive elections including a stint as deputy leader under Garret Fitzgerald in 1979, Minister for the Environment from 1981 to 1982, and Minister for Foreign Affairs from 1982 to 1983 until his retirement after the 1997 general election – giving up his seat to his daughter Deirdre Clune. However, it is as a tea-maker that many Corkonians remember Peter Barry and his family. 'Barry’s Tea' has around 40 percent of the Irish tea market with a loyal following in Cork and beyond. ('Hard-headed politician turned Barry’s Tea into a success', Irish Times, 26.08.2016.)