Award presentation with Louis Marcus, Gerry Murphy, and others 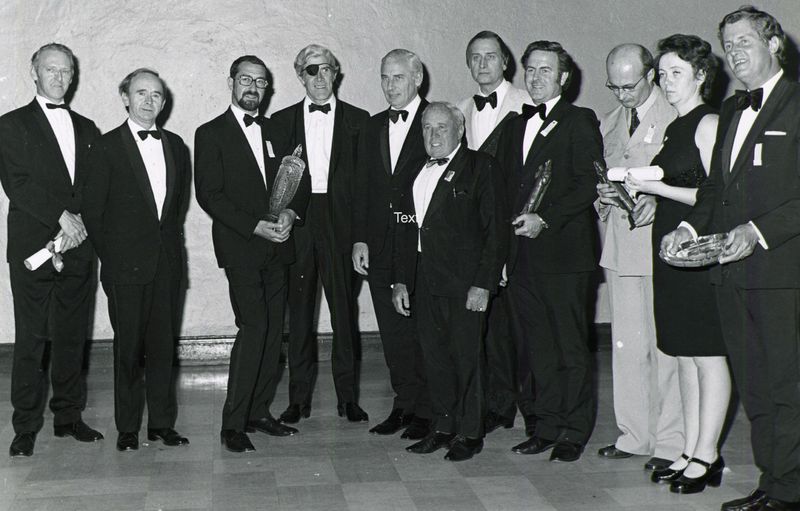 Award presentation with Louis Marcus, Gerry Murphy, and others

This is a black and white photo of festival delegates, some of whom are holding awards. We recognise festival committee members and friends including Gus Healy, Peter Barry, Gerry Jones (with eye-patch), along with Lord Mayor Pearse Wyse at the left of the photo – hands clasped behind his back.

Wyse served as Lord Mayor of Cork in 1967 and again in 1974. He stands next to the Irish filmmaker Louis Marcus who is holding the Waterford Crystal Award which was awarded for the best Irish film. His first documentary The Silent Art (1958), on his friend the Cork-born sculptor, Seamus Murphy (1907-1975), is of particular interest to us as Murphy designed the bronze St Finbarr statuette that was presented to prize winners at the Cork Film Festival for some years. In this photo we see two delegates holding the statuette as designed by Murphy.

We note that one of the award recipients, Gerry Duffy, was Manager of 20th Century Fox in Ireland and received his award on behalf of the screenwriter Alvin Sargent for The Effect of Gamma Rays on Man in the Moon Marigolds (Paul Newman, 1972). The picture also includes Gerry O'Halloran - who might be the tall man wearing a light-coloured jacket standing behind a low-sized Gus Healy. O'Halloran was from the British Film Institute and participated in workshops for the festival.