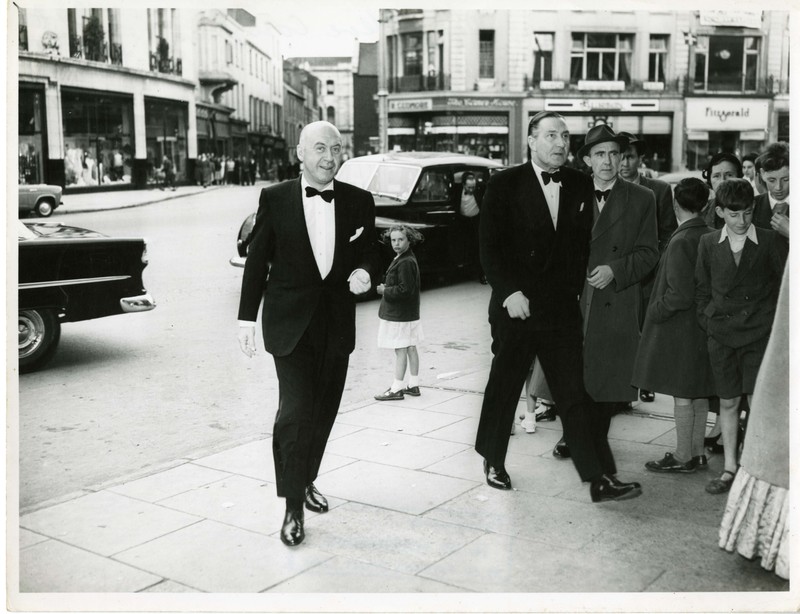 This is a black and white photo of the American theatre and film director, Otto Preminger, taken on Patrick Street outside the Savoy Cinema. In this picture Preminger, in a dark suit and bow-tie, is walking purposefully towards the cinema accompanied by two others.

A small crowd gathers around Preminger and entourage, and a young girl is caught at the kerb-side looking back over her left shoulder towards the camera. She is wearing a light-coloured dress and a dark jacket, her short hair tousled by the wind. Further behind Preminger we can see a slice of life on the main thoroughfare that is Patrick Street. Directly behind him, in the distance on Winthrop Street, we can just about make out the crowds gathered outside the now shut Lee Cinema next door to the limestone façade of the Cash & Co. department store (now Brown Thomas). The Lee Cinema was closed in December 1920 after the 'Burning of Cork' and reopened in September 1921, finally shutting down in April 1989. Beyond the crowds we can glimpse the Cork General Post Office at the junction of Winthrop Street and Oliver Plunkett Street. Winthrop Street was pedestrianised in the 1970s but in this picture we see how Patrick Street follows down Winthrop Street, passing the Lee Cinema which was so close to the Savoy Cinema.

Otto Preminger (1905-1986) was born in Austria-Hungary but fled to Austria with his family after the breakout of the first World War. He went on to work for Fox in Los Angeles and was known for defying the censorship code of Hollywood with his controversial films. He directed Dawn Addams, who was also at the festival when this photo was taken in 1957, in The Moon is Blue (1953) which was nominated for three Oscars.