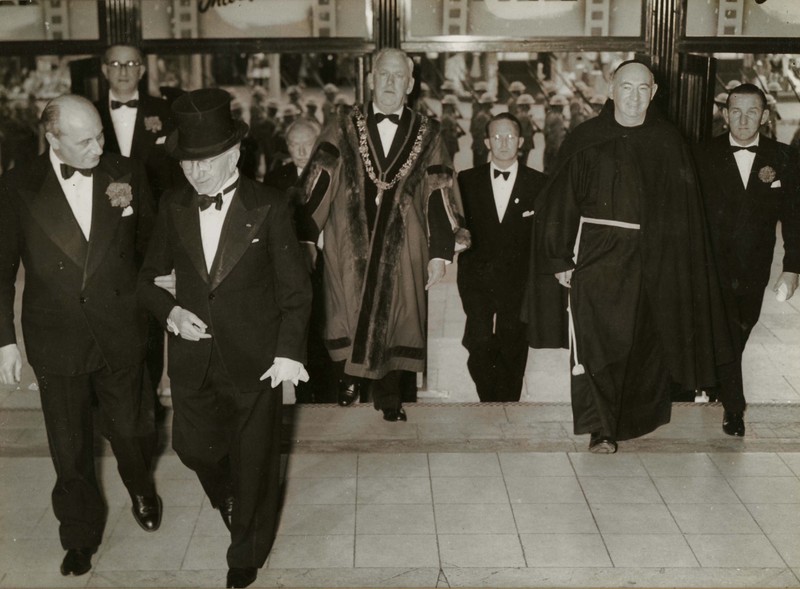 This is a sepia-toned black and white photo of President Seán T O’Kelly being escorted into the Savoy Cinema by the Irish impresario Louis Elliman. This was taken in 1956 during the first edition of the Cork International Film Festival and would have been a momentous occasion. President O’Kelly, wearing a top hat, is shown at the head of the entourage, head bowed. On his right Elliman has his arm linked with O’Kelly and is looking towards him as if listening to O’Kelly speak. The Lord Mayor of Cork, Patrick McGrath, wearing the mayoral gown and sterling silver chain of office, is behind the President coming up the marble steps of the Savoy. He is accompanied by others identified on the photo’s mount as Mr A Elliman, Major TD Hallinan, Fr Cormac and Mr CM Conroy.

Patrick McGrath was an Irish Fianna Fáil politician who represented Cork in Dáil Éireann between 1946 and 1956. He served as Lord Mayor of Cork from 1952 to 1956. McGrath took an active part in the Irish War of Independence and was honoured by his comrades by appointing him chairman of the Cork City Old IRA Men’s Association. During his term of office he welcomed Laurel and Hardy to the townhall during their visit to Cork in September 1953. He died suddenly in 1956 and was honoured by Taoiseach, John A Costello, in the Dáil on his passing who said of McGrath: “The late Deputy was kind, courteous and charitable … He was an eloquent and forcible speaker and made many useful contributions to the debates of the Dáil on national questions.” (Dáil Éireann debate Wednesday, 20 June 1956, Vol. 158 No.5.)

President Seán Thomas O’Kelly (1882-1966) was born in inner-city Dublin. He worked in the National Library in Dublin and was an subscriber to the Celtic Literary Society. O’Kelly was one of Ireland’s early leaders of the Sinn Féin party. He was an associate of the Sinn Féin founder Arthur Griffith and from 1913 he helped to raise the Irish Volunteers. During the Easter Rising of 1916 he worked out of the GPO with provisional plans to set up as an administrator of the Irish Republic which never came to fruition. He met his future wife, Mary Ryan, during the Rising and married her in 1918. O’Kelly was later imprisoned in Britain for his part in the Rising before escaping back to Ireland and working with Sinn Féin. He was a close friend of Éamon de Valera, also opposing the Anglo-Irish Treaty, and when de Valera set up the new Republican party Fianna Fáil in 1926 O’Kelly joined it becoming vice-president. O’Kelly was a devout catholic but his membership of the Knights of Columbanus caused de Valera much consternation but O’Kelly refused to relinquish his membership of the Knights. He succeeded Douglas Hyde as President of Ireland and served two terms from June 1945 to June 1959 retiring from public life after his second term.

The President is accompanied in this picture by Dublin-born Louis Elliman. Elliman managed many of Ireland's cinema screens during the 1950s and brought film production to Ireland opening the Ardmore Studios, with Emmet Dalton, in 1958.