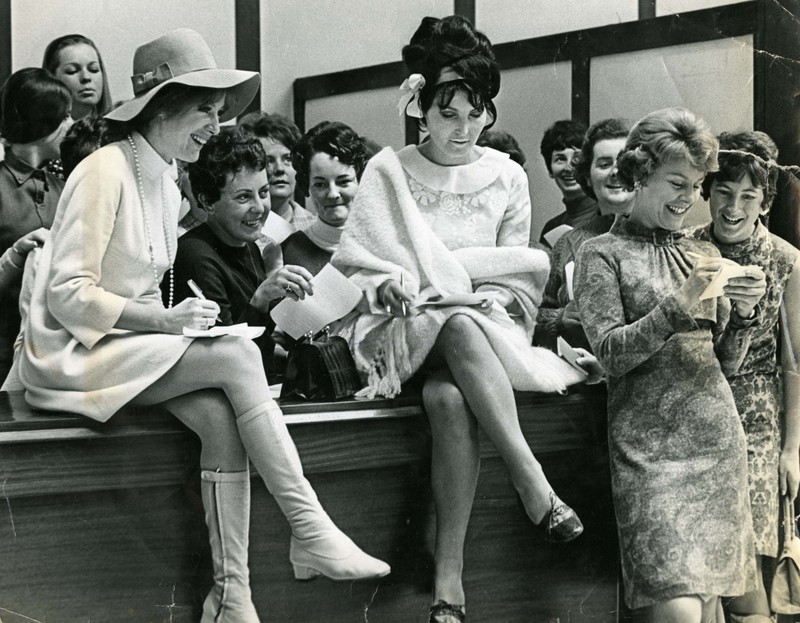 This is a black and white photo of film actors, Heidelinde Weis, Bettine Le Beau and Eva Ingeborg-Scholz, signing autographs for the office staff of Beamish & Crawford Ltd during a reception for delegates attending the 13th Cork Film Festival in 1969. Weis and Le Beau are shown sitting on a bench smiling while they sign scraps of paper and autograph books for the ladies that surround them excitedly. On the right Scholz is leaning against the bench and laughing as she signs her signature. All three are dressed in the distinctive fashion of late 1960s be it a floppy hat, pearls, a bright ribbon in the hair, or a paisley-print dress. Behind them there is evident joy in the faces of the staff as they jostle around the actors seeking an autograph.

The photograph identifies the location as the Beamish and Crawford brewery and, based on the wooden panelling in this picture, this might be the tudor-framed reception room of the iconic Counting House on South Main Street in Cork. The brewery was established in 1792 by William Beamish and William Crawford. It was once Ireland’s biggest brewery until overtaken by Guinness in 1833. It closed in March 2009 and its site on South Main Street, is currently being converted into student accommodation and a possible events centre. It has a special place in the cultural memory of Corkonians and former Beamish workers note that the brewery was more than just a workplace but was the very ‘heart of Cork’. (Barry Roche, 'Nazi links and the colourful history of Beamish and Crawford', Irish Times, 27.10.2015; Donal Ó Drisceoil and Diarmuid Ó Drisceoil, Beamish and Crawford: the History of an Irish Brewery, Collins Press, 2015)

Eva-Ingeborg Scholz (1928-) was a German film and television actor known for The Girl from the Marsh Croft (Gustav Ucicky, 1958), Emil and the Detectives (Peter Tewksbury, 1964) and the televison show Tatort (1970) for which she won a German Actors Award.

The Belgian actor Bettine La Beau (1932-2015) was known for her television, film and radio appearances in the UK. In particular she would be associated with the long-running Benny Hill Show (1969) from 1971 to 1972, The Prisoner (1967), and Call My Bluff. She had an uncredited appearance in the first James Bond film Dr. No (Terence Young, 1962) and small parts in a number of films. Her radio appearances included regular appearances on the BBC World Service programme Animal, Vegetable, Mineral? Her personal life is poignant as she was separated from her parents during World War II and held in two concentration camp during the Holocaust before escaping eventually to England. She would later work as a public speaker speaking about her experience of the Holocaust and authored a book Help Yourself to Happiness in 1999.

The third actor in this picture is Heidelinde Weis (1940-). She is an Austrian actor whose film work around the time she came to Cork, in 1969, include The Man Outside (Samuel Gallu, 1967), and Something for Everyone (Harold Prince,1970). Her 1964 film directed by Michael Pfleghar, Die Tote von Beverly Hills (Dead Women From Beverly Hills), was re-released in 2019 as a digitally restored HD version. It has a place in German film history for its invitation to Cannes in 1964, where it won the Palme d’Or and for taking the ‘Bambi’ award for most artistically valuable film in 1965.