Anita Price from CINE and Ide Warren in Macroom 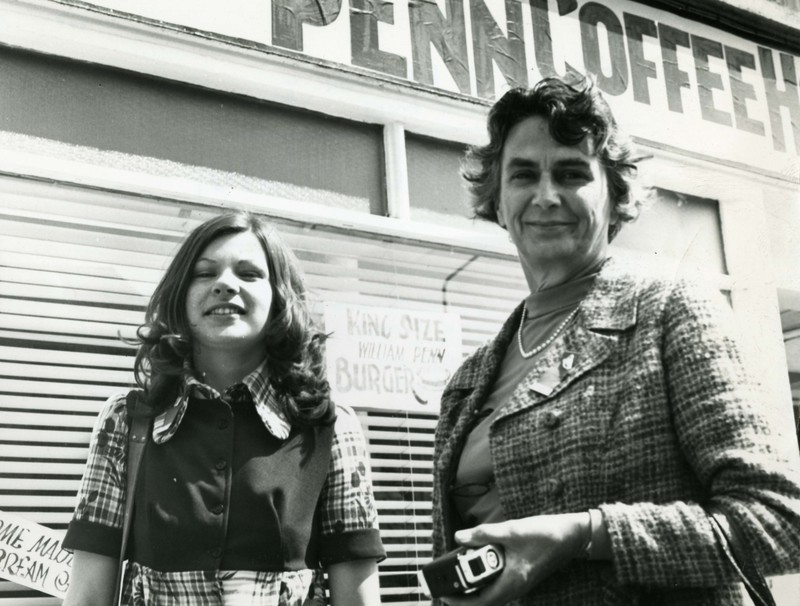 Anita Price from CINE and Ide Warren in Macroom

This is a black and white photo of Anita Price from CINE, based in Washington DC, and festival representative Ide Warren. Price, in a tweed jacket and holding a camera, smiles for the camera next to her young companion. The photo, which is stamped by the Irish Tourist Board (Bord Fáilte Éireann), notes that she is the daughter of Cadwallader Kelsey of Philadelphia. Cadwallader Kelsey was the founder of the Kelsey car company and ran it from 1897 until its demise in 1924. His three-wheel automobile, Auto-tri, is now on display in the Smithsonian Institution. Prior to his death in 1970 he was working on developing a flying automobile, the Skycar. (The New York Times, 18.05.1970.)

Being from Philadelphia, Anita Price would have been familiar with the link between the founder of Pennsylvania, Admiral William Penn, and Macroom, County Cork. Penn’s father, Sir William Penn, lived in Macroom Castle for some years following Cromwell’s successful battle during the English Civil War. He later lost the lands after the restoration of the monarchy and received an estate in Shanagarry, East Cork, in 1667. His son, the Quaker William Penn, would found the State of Pennsylvania after spending time in County Cork at his father’s estate during the 1660s. (Brian McCarthy, ‘An Irishman’s Diary’, The Irish Times, 02.05.2000.)

In this photo Price is posing in front of the 1970s façade of Macroom's Penn Coffee House, advertising a 'Kingsize William Penn burger' on its window. The photo notes that she was the then Managing Director of CINE (Council on International Nontheatrical Events) in Washington DC. Founded in 1957, CINE was a non-profit organisation whose mission was to select American films and documentaries for international film and video festivals. It awarded prestigious Golden Eagles to those selected to represent America and recipients include Mel Brooks (The Critic, 1963), Barbara Koppel (American Dream, 1990; A Century of Women, 1994; Bearing Witness, 2005) and Martin Scorsese (No Direction Home, 2006). In the year of this photo, 1972, the award was won by Ron Howard for Deed of Daring-Do (1969).