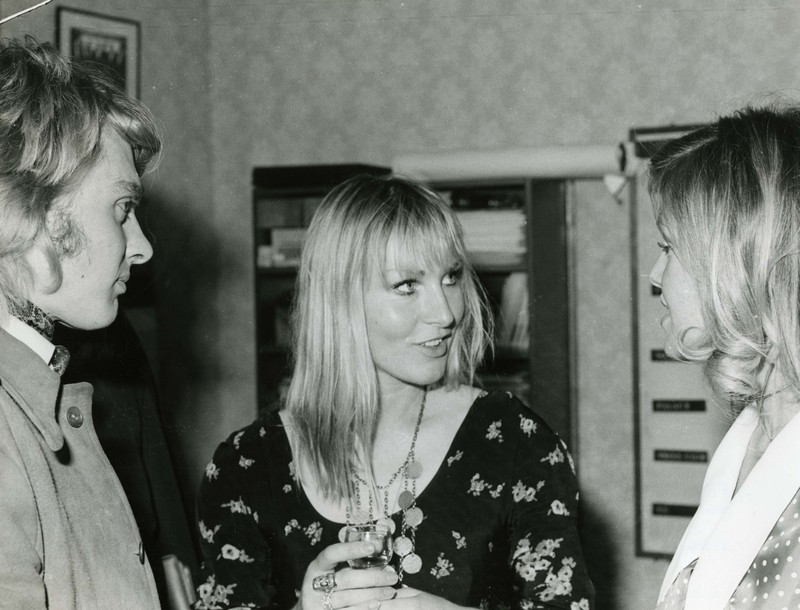 This is a black and white photo of the English actor Virginia Wetherell in conversation with a colleague identified as Vicki Coomber. The fair-haired actor Shane Briant, in a suede jacket accessorised with a cravat, is standing on the left listening to the conversation. Wetherell, at the centre, in a dark-patterned dress, is turned to her companion and smiling. Both Wetherell and Briant worked together in the British horror film Demons of the Mind directed by Peter Sykes which was released in 1972 – the year that this photo was taken at the festival.

Born in 1943, Virginia Wetherell was an English actor best known for her roles in Hammer horror films such as Dr Jekyll and Sister Hyde (Roy Ward Baker, 1971) and aforementioned Demons of the Mind. She also appeared, as the naked actor tempting Malcolm McDowell as Alex, in Stanley Kubrick’s A Clockwork Orange in 1971. Wetherell had a large body of television work throughout the 1960s to the 1980s, including the part of Dyoni in the first Dalek story series of Doctor Who. In 1971 Wetherell opened a vintage clothes shop in London’s Notting Hill, known as Virginia, shutting down in 2015 when Wetherell (now Bates) turned 72.

Wetherell's companion in this picture is the actor and novelist, London-born Shane Briant. Briant studied at Trinity College Dublin before becoming an actor best known for his roles in Hammer Film Productions. He has many television credits, both in England and Australia where he settled, as well as film credits including the British Cold War thriller The Mackintosh Man (John Huston, 1973) with Paul Newman and James Mason (who can also be found in this archive), and as Clifford Chatterley in Lady Chatterley's Lover (Just Jaeckin, 1981). Briant's first short film, A Message from Fallujah (Richard Gibson, Shane Briant, 2005), won a 'Best of the Fest' award at the 2005 Los Angeles International Short Film Festival and was considered for an Academy Award that year.